Want to let your date know you’re interested without saying a word? We asked dating expert and media personality Terri Trespicio how to let your body do the talking. 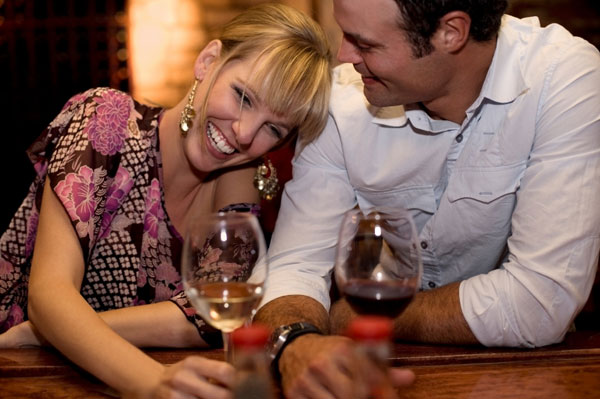 “Though I don’t know Sheryl Sandberg’s take on dating, I kinda think she’d be into this one,” says Trespicio. A slight body tilt shows that you’re engaged in the conversation and that you care what your date is talking about. “If your spine hasn’t left the back of your chair all evening, that’s not hard to get. That’s a cold fish vibe.”

If you’re not a natural hair twirler, you might want to practice this one at home first. Trespicio suggests touching your hair occasionally in an absent-minded way — “a twirl, a stroke, nothing dramatic.” A little tendril touching can be a sensual way to draw attention to your face and neck. “And when you touch your hair, he’s got to wonder what it would be like if he got to,” she says. “Not a bad thing.”

It all starts with the first impression, so show you care by putting some effort into your appearance. “It’s not about comfort; it’s about confidence,” says Trespicio. “I want to be comfy when I settle into a transatlantic flight or am cleaning my apartment. But not on a first date.” Everything about a first date is the opposite of comfortable, she explains. “The whole point is to get beyond your comfort zone, because that’s where you reap the greatest rewards on a date. Making an effort to show your best self shows you give a crap about where you are. The care you take with your appearance that first time speaks volumes about how much effort you’re willing to make, period.”

French researchers found that the simple act of touch can double the chances of getting a date. In this amorous study, 240 handsome young men stopped women on the street, told them they were pretty and asked for their number so they could meet for a drink later. The women who received a light one-second touch on their forearm gave their number 20 percent of the time, while those who weren’t touched only handed over their digits 10 percent of the time. Just make sure you don’t overdo it. Trespicio suggests a brief touch on the forearm or shoulder or a light graze of the leg when emphasizing a point or when something makes you laugh.

Give some encouragement with a big friendly smile. “You’d be surprised at how often you may, without realizing it, lapse into Sour Face,” says Trespicio. “I say this because I do it too. If you’re not intentionally smiling and softening the edges around your face, you can come across scowly, even if you don’t mean it. Don’t believe me? Catch yourself unawares in a store window when you’re storming down the street.” Seriously. Nobody wants to see that face.

Take a moment of silence

This may not come naturally, but Trespicio says you should stop talking at that moment when the date is coming to a close. “Thank him for the date, say you had a nice time and just smile. It’s killing you for there to be silence, but it’s in that palpable moment when he’ll either tell you he wants to see you again or full-on kiss you.” No matter what the outcome, she says to act like this is exactly how you planned the date’s ending.

Make eye contact! Research shows that pictures of happy people looking directly at the camera, instead of looking away, were considered to be the most attractive (especially to the opposite sex).

10 Questions to cure a quiet moment on a date
5 Ways to ask for what you need in your relationship
Not a good conversationalist? Here’s how you can improve