Do the traditional opinions on marriage still hold true in the modern world? We polled our readers to help us determine what’s true and what’s not when it comes to how women feel about marriage and monogamy today.

We polled our readers to help us determine what’s true and what’s not when it comes to how women feel about marriage and monogamy today.

Even though women are more independent today than ever before and don’t need a man around, it seems that we still want one.

We gave you the choice: Single forever while traveling the world for free, or marry the man of your dreams tomorrow?

Do you still believe in happily ever after?

Despite the cliche of being Facebook official, 85 percent of women either don’t have Facebook, or if they do, they claim they would not make him change his status on Facebook. (Guys, that’s not to say we don’t appreciate it as a nice gesture to let us know you’re serious.)

Your take on cheating and past lovers

Where does cheating start?

of women say it starts with flirting.

actually don’t count it as cheating until clothes come off.

If your spouse cheated…

44 percent doubt they could forgive even if they tried.

30 percent would end it immediately.

28 percent would try to forgive him.

Wedding crashers 101? While the idea of crashing an ex’s wedding sounds pretty humorous, we are happy to report that only 1 percent of you have actually done it. Here’s to taking the high road!

When asked to diagnose your last relationship… 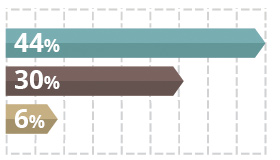 44 percent are happy it’s over.

30 percent are still friends with him.

6 percent admit it was just a one night stand.

Does it have to be diamonds?

won’t walk down the aisle without a diamond.

said it was their dream ring.

said it wasn’t what they pictured, but still loved it.

were disappointed with their engagement ring, but only 4 percent of you actually had it exchanged.

Only 15 percent of women would actually propose to their man while 34 percent would consider it.

30 percent of you have turned down a proposal.

While 86 percent say you don’t need a grandiose proposal, 71 percent still want it to be a surprise no matter how simple the proposal is.

When it comes to moving in together…

69 percent feel that couples should live together before the wedding.

31 percent feel that couples should not join homes until they join hands in marriage.

Would you do this?

Marry someone of a different faith? 65 percent said yes.

Marry someone your mother hates? 61 percent said yes and only 9 percent said they wouldn’t if their father disapproved. (Where did all the daddy’s girls go?)

Did kids put your marriage in a funk?

said they haven’t been able to recover the romance.

said it actually improved their marriage.

of women don’t recall one single moment when they knew he was “the one.”

Do take-backs apply? 11 percent say you are still questioning whether it was meant to be.

We asked you to share the best marriage advice you received. Here are some of our favorite responses:

“A marriage is like a parcel, you never know what may pop out!”

“Don’t let the sun go down with a fight in the air.”

On the contrary, someone else said, “Go to bed angry. It makes for better sex.”

“He’s no more perfect than you are.”

“It’s not about the socks on the floor.”

“The person who apologizes first is the strongest.”

How dominant is the average woman?
Women want hearts and flowers, with a side of kinky sex
Tell us your dirty little secrets!

4 hrs ago
by Gina Escandon

9 hrs ago
by Ally Hirschlag