From an act of infidelity to the realization that, well, they just deserve better, these 10 women open up about up their “aha” moments and why they decided to finally kick him to the curb! 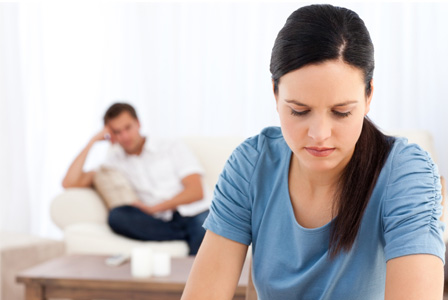 A walk to remember

“Omg. I remember walking through downtown San Francisco feeling pretty confident and happy, and then I randomly ran into my boyfriend and just shrunk up inside. That’s when I knew he didn’t make me happy, and it was time to move on.” — Samantha

Out of whack priorities

“My med school ex said, ‘Yeah, it sucks, but until I finish med school, my education will come first and a girlfriend will always come second.’ This was my breaking point. I was willing to sacrifice a lot for my very busy partner, but to know that I was blatantly not a priority was a deal breaker. I appreciated his candidness, because it saved me over five years of waiting for him to finish his schooling! Dodged a bullet there.” — Rachel

What a girl needs

“Although I had such strong feelings for him, my needs simply weren’t met in the long run. I tried so many times to be patient and understanding, oftentimes catering to his needs and putting mine on the back burner because I wanted the relationship so badly. After weighing my options, I knew I had to either continue to not honor my feelings and continue in a relationship that was simply not healthy, or face the truth and realize my feelings were my priority and I owed it to myself to respect them.” — Megan

“I was married for 16 years to the father of my two kids. I had suspected affairs in the past, but finally something confirmed it: He bought me a beautiful ring on our credit card, and when I was doing our bills, I thought he had been charged twice, so I called him at work to inform him of the error. He said, ‘Oh, my assistant admired the ring so much I bought her the same one!’ My heart sank. It was my ‘moment of realization.’ I asked for a divorce the following day.” — Alicia

He slept with my sister

“My first husband was quite the ladies’ man. To this day, I still don’t think he has it in him to be truly faithful in a monogamous relationship. Each time I would catch him in a questionable situation, he would beg for forgiveness. Finally, it reached a point where my suspicions were proved true (he slept with my sister!), and I got the courage to end the marriage.” — Jessee

Kind words from a stranger

“After my bachelorette trip to Vegas in 2009, I came home and called off my wedding two months prior to the big day. A British man told me I was beautiful, and I realized I still had it in me and didn’t need to settle. Thank goodness because the husband factor is so much hotter this time around, if I don’t say so myself!” — Sarah

“In my last relationship before meeting my husband, I was dating a guy that seemed perfect on paper: He was super tall, successful, well-traveled and a devoted single dad, but one day he admitted that he would be disgusted if his son ever believed in God. I asked why, because that’s sort of a personal thing, and everyone is entitled to make up their own minds about their spirituality. He went off on a rant about God and science not working together, and that’s when I knew it just wasn’t going to work. I like an open-minded gentleman, thank you very much.” — Bryce

“As soon as I realized that my friends were no longer in the picture, it hit me that it was time to separate. We only had fun with his friends, but with mine, it was a struggle from day one. Finding someone that adores my friends is very important to me, and only recently did I figure this out myself.” — Tina

Not ready for kids

“I knew it was time to move on when I realized I wanted children, and he was years away from that.” — Marissa

Too much making up and breaking up

“I truly believed I was with my soul mate and the love of my life. We had been together for five years; however, we became one of those couples who broke up and got back together. My moment was when I answered his phone and it was his ex-girlfriend on the line. It didn’t even matter why she was calling, who reached out to who, etc. I just knew I deserved better. I was tired and exhausted from this relationship. It was heartbreaking, but I did it for me.” — Farrah

When did you realize that it was time to move on? Share your “aha” moment in the comments below!