There’s been a ton of talk about gay marriage over the past couple of days, thanks to the Supreme Court’s debate over the constitutionality of California’s Prop 8 and the federal Defense of Marriage Act. Let’s break down what has happened so far. 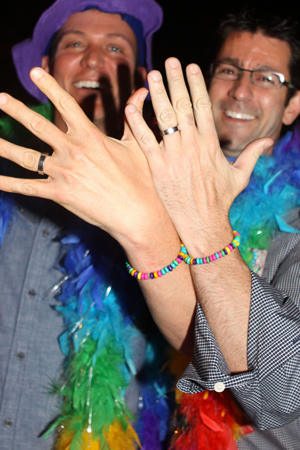 On Tuesday, the U.S. Supreme Court heard oral arguments against California’s Proposition 8. Prop 8 — voted into law in 2008 — banned gay marriage in the state, but then the California Surpreme Court overturned it in 2012.

Opponents of Prop 8 want it thrown out for good, so the SCOTUS listened to nearly 90 minutes of arguments in the case.

The justices’ comments were split down conservative and liberal lines.

“Traditional marriage has been around for thousands of years. Same-sex marriage is very new. I think it was first adopted in The Netherlands in 2000. So there isn’t a lot of data about its effect. And it may turn out to be a — a good thing; it may turn out not to be a good thing, as the supporters of Proposition 8 apparently believe.

“But you want us to step in and render a decision based on an assessment of the effects of this institution which is newer than cell phones or the Internet? I mean we — we are not — we do not have the ability to see the future.”

“I — I think there’s  — there’s substantial — that there’s substance to the point that sociological information is new. Five years of information to weigh against 2,000 years of history or more. On the other hand, there is an immediate legal injury or legal — what could be a legal injury, and that’s the voice of these children, 40,000 children in California, according to the Red Brief, that live with same-sex parents, and they want their parents to have full recognition and full status. The voice of those children is important in this case, don’t you think?”

“What harm do you see happening and when and how and — what — what harm to the institution of marriage or to opposite-sex couples — how does this cause and effect work?”

“What precisely is the way in which allowing gay couples to marry would interfere with the vision of marriage as procreation of children that allowing sterile couples of different sexes to marry would not? I mean, there are lots of people who get married who can’t have children. To take a State that does allow adoption and say — there, what is the justification for saying no gay marriage? Certainly not the one.”

Jay-Z: Gay marriage is the right thing to do >>

On Wednesday morning, the SCOTUS heard arguments on whether or not the thousands of married homosexual couples should have the same protections under the law as heterosexual couples. The talks centered around the Defense of Marriage Act (DOMA), a law signed in 1996 by then-president Bill Clinton that recognizes marriage as being only between a man and a woman.

Specifically, gay couples do not have the same access to their partners’ Social Security, retirement, bankruptcy and medical leave protections as same-sex couples.

Today’s debates show promise that the act might be thrown out when the Supreme Court makes its final decision. The reason? The potential swing vote in the SCOTUS — Justice Anthony Kennedy — said that DOMA poses a “real risk of running into traditional state police power to regulate marriage.”

“What gives the federal government the right to define marriage?” she said.

But the decision is far from final.

“This was a deeply divided Supreme Court, and a court that seemed almost to be groping for an answer here,” CNN senior legal analyst Jeffrey Toobin said after the hearing.

Final rulings in both cases are due in late June.

What side are you on in the gay marriage debate? Sound off in the comments below!