Your Facebook news feed is likely flooded with the now-infamous red equal sign. To support equality in gay marriage, or to not? Isn’t that really the question? 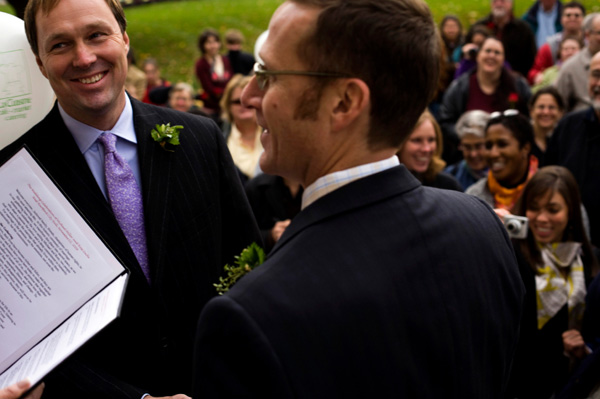 People are people… why is this even an issue?

Max Franco works in the finance industry in midtown Manhattan:

The foundation of this country was built on individuals’ unalienable right to pursue life, liberty and happiness. Forbidding or stigmatizing same sex couples is a clear infringement on those rights. While I fully support marriage equality, I do have one caveat which isn’t well informed by data and evidence, but something I think to be true. Same sex couples should be afforded all the economic and social rights that heterosexual couples receive: tax benefits, employer benefits, etcetera. But in the case of child adoption, all things being equal (income, education level, etcetera), I think it may serve society well if the heterosexual couple was given priority. I think the child’s interest should come before the couple’s pursuit of happiness. As I mentioned, there is no evidence to support my belief, it is just an opinion. That could be changed with studies over time done on children of gay couples, though. In that case, I can be swayed if evidence proves to be contrary to my opinion.

Stephanie Sparks Donlan is a mother and wife in Georgia:

I think it’s weird we have to even have a Supreme Court hearing on this. The government shouldn’t have a say in who can and can’t get married. If religious people think it’s wrong, that’s fine, that’s their right, but don’t use the government to spread those beliefs. If it’s a religious issue, let the individual religious establishments (churches, temples, mosques, etcetera) choose who they want to marry and who they don’t want to marry.

Laura Kathryn Tidwell Book is the proud daughter of a gay man:

Marriage equality is a fundamental right. I have heard in my youth, people assume that homosexuals should not be parents because [Christians] see it as an abomination, and I am southern born and raised (home of the Bible Belt). However, I have two female friends who are a very strongly committed and loving couple, with kids, as well. They are patient, and kind with their kids, they communicate well with them, and their kids seem more mature because of it (the communication aspect). As a child, who has a biological parent who is homosexual, I feel personally, that I am a better human for it… more open and more sensitive. While being ignorant is not a solution, education and communication is.

Christina Pinella is a police officer in Florida:

You don’t have to like my lifestyle, you can call me all the names you want, and you can even look away when I hold my girlfriend’s hand as we walk by, but I will be damned if anyone tells me who I can and cannot marry, or that my marriage isn’t real because the person I say my vows to is a female. Who I love and decide to share my life with is no one’s business, just as it is not my business who other people are with. I serve my community every day as a police officer and I took an oath to protect and serve complete strangers and keep people safe. What if I picked and choose who I protected and kept safe and didn’t treat everyone as an equal? One day I hope to get married, and when I look into my future wife’s eyes and say my vows, I swear to keep them, just as I swore to keep my oath as a police officer.

Jennifer Giacalone is a graphic designer and mother of two living in New Jersey:

This is just one of those times where the law really needs to catch up to the way most people already feel. If they punt on this, which seems unlikely, it will only be a temporary victory for opponents of equality. It sounds from dispatches coming from inside the court that five of the justices are pretty skeptical that there’s any benefit to continuing to ban gay marriage. What we are seeing is the definition of a sea change on this issue, and for me, as someone who campaigned and agitated in favor of it as a youngster, it’s a big big deal.

Laura Leonard is a bride-to-be, whose full-time job is planning her wedding:

I think we are fighting the wrong term. What is gay marriage? It is simply marriage: A contract you enter promising and committing to each other to always love and respect one another. We are fighting for equal rights. Just as people fought for my dad’s school to be integrated or for myself to enter into a bi-racial marriage. As a nation, we need to come together and say no one deserves to be treated as less than or for their love not to be recognized.

Jonathan Sokoloff is a teacher in Jacksonville, Florida:

I firmly believe in the fundamental right for two adults who love one another to marry each other regardless of gender. I’m afraid that I’ll discover that someone I care about or love is against gay marriage. I don’t know how I would react to someone who is actively in my life if I discovered they didn’t think I was worthy of marrying the person I love, when that knight in shining armor comes along. I get the same nervous feeling in my stomach that I got when I came out to my friends and family as being gay. I had to go into that conversation prepared to not have that person in my life if they didn’t approve of me, because I couldn’t imagine them capable of loving me any other way.

I woke up this morning as I usually do, listening to NPR. The headlining segment was the Supreme Court ruling on gay marriage. With repeated verses of the quote from the Bible that “marriage” is defined as being between a man and a woman. It really highlighted what’s always bothered me about the argument. Of the many things that I love about being an American, one is the belief in separation of church and state. If “marriage” is indeed defined by the Bible, doesn’t that make it religious doctrine that should not be regulated by the Constitution? If you want to practice marriage in your church, that seems to be completely acceptable, but if that “right” keeps others from having equality, it seems like it would not keep with the spirit of our Constitution. I’d propose that instead of letting more people marry, we just do away with the term legally altogether. Let’s have a Supreme Court ruling that “civil ceremony” is the legal term from now on, and if you want to marry, its a sacrament that you receive in the church.

Up next: The other side of the argument >>