As if love wasn’t hard enough, throwing two different religions into the mix can get complicated for some families. However, like the expression says, “Love conquers all!” Here are some reader stories of how their families get through the holidays.

As if love wasn’t hard enough, throwing two different religions into the mix can get complicated for some families. However, like the expression says, “Love conquers all!” Here are some reader stories of how their families get through the holidays.

Lisa Mabe, founder of Hewar Communications and Protestant Christian, shares the values that she and her Greek Orthodox hubby plan to live by: 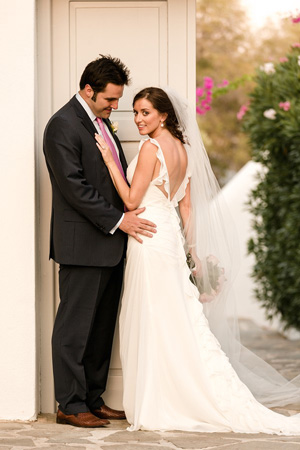 I’m a newlywed (will be six months later this week when we go on our honeymoon!). I’m Protestant Christian, and my husband and his family are Greek Orthodox. Being non-Greek and also non-Orthodox, it’s been so much fun getting to know their “new-to-me” traditions. Though I remain dedicated to my own faith and traditions, I also fully embrace theirs and have great fun doing it! Our recent wedding in Athens, Greece was a perfect example of blending our two faiths and cultures.

Regarding Easter, we’ve already been discussing our plans. I’ll be celebrating Easter this month as I normally would and then will celebrate again a few weeks later during Orthodox Easter. I’ll go with my in-laws for a big traditional Greek feast featuring special recipes just for Easter.

We’ll then go to a local Greek Orthodox church for a midnight service that includes a unique tradition of lighting candles and keeping them burning until we get home. The first time I did this, I was shocked that people got into their cars with real burning candles — seems like a hazard to me! It was quite a sight to see hundreds of people with glowing candles in their cars as we all left the church to go home.

Jenna Watson, president of Visionary5 and a Christian, is very passionate about this topic. She and her Jewish fiance have found a way to make their relationship work:

My fiance is Jewish and I am Christian. We’ve been together for two and a half years and have had plenty of conversations about how we celebrate the holidays and how we will continue to celebrate once we have children. Currently, we celebrate both Jewish and Christian holidays and plan to do so for the rest of our lives. We spend Passover with his family and Easter with mine. Same goes for Hanukkah and Christmas.

There was definitely a learning curve. In my case, I already know much of the Jewish beliefs because they are also a part of Christian beliefs (the Old Testament). But, the Jewish religion has SO many cultural traditions and rituals that I am still learning. EVERYTHING in the Jewish religion has a meaning/story behind it, so there is still a lot for me to learn! But the most important thing I can do is show I care and want to learn. I participate in the rituals for Passover and read from the Passover book just like everyone else does.

On the other hand, my fiance never celebrated any Christian holidays before we were together. He knew about the commercial Christmas and Easter, but he had never been to church or really celebrated either holiday. My family goes to a mega-church in San Diego and I am sure it was totally overwhelming for my fiance the first time he came with us.

The bottom line is, we both support each other’s religions and cultures and we don’t want either of us to feel like one is more important than the other. So, we take an active role in learning and participating in each other’s traditions and customs. We believe that is the key to making an interfaith marriage (or relationship) work.

Tracy Bagatelle-Black, an avid Jewish reader of SheKnows, shares the way she and her Protestant ex-hubby handle the holidays with kids:

I am Jewish and my ex-husband is atheist but grew up Protestant, so he celebrates Christmas, and to a lesser extent, Easter. When we were together, we celebrated both religions. We had a tree, but it was decorated with all blue and white ornaments. I put dreidels and gelt in their Christmas stockings. During Hanukkah, we lit the menorah every night and attended the temple’s community Seder. For Easter, we painted eggs and the kids got baskets.

But now, we are divorced, and the holidays are really crazy. [He] still does Hanukkah with them if he has them on a night of Hanukkah, but doesn’t get them gifts for the other nights. He’s back to a big Christmas with lights and a multicolored tree. If the kids are with my ex for Passover, they don’t really do anything special, and he doesn’t always see them on Easter, since he didn’t ask for that specifically. But he will celebrate it if the holiday falls on a weekend that he’s with them. There are so many other ‘if this, then that’ scenarios with our family, but the most important thing is that our children feel loved by both parents. I was so nervous about confusing my 6-year-old son with this that I bought him a book called My Two Holidays. But, I guess this is all just normal for them.

Dr. Fran Walfish, child and family psychotherapist and author of The Self-Aware Parent, says that parents’ consistency around their children is key:

When it comes to couples who plan to have children, the bottom line is that parents with different religions can actually enrich their children’s life experience with exposure and celebration of both cultures, religious practices and customs. The situation that creates a wedge between partners is that in which each one has, or develops after marriage, strong Orthodox beliefs and practices. I have treated many families in which after having children, or after suffering a life trauma, one parent becomes fanatically involved in their religion. This can tip the equilibrium in the marital relationship and cause deep confusion in the children about their individual identities.