Dexter’s brunette beauty Jennifer Carpenter recently graced the cover of the Women’s Running March issue, and we have the scoop on her love of running, her favorite “bad” workout song and even the actor she’d most like to run with. 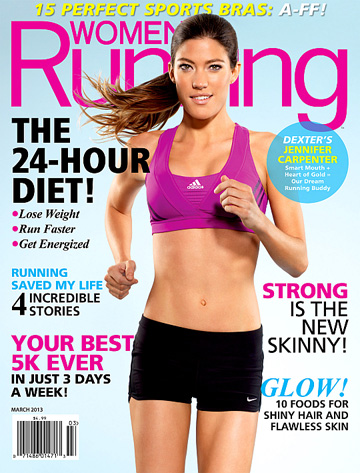 It’s no surprise to us why Carpenter is this month’s Women’s Running cover girl. It’s pretty evident by the gorgeous photo that she’s been running a lot (just take a look at her amazing abs).

On New York, rejuvenation and running

The bicoastal, three-time marathon runner lives in New York City during the Dexter off-season and thrives on the fast-paced energy. “I like to come here [New York] in between filming to reset,” she says. “Even though you can go a hundred miles per hour here, it rejuvenates me somehow.”

You just don’t want to mess with her if she needs to get to her running shoes. She once broke into her building in Soho to get them — during Hurricane Sandy. “I forgot the keys to my building, so I scaled six stories up the fire escape to get inside,” she says. “The Italian restaurant next door let me climb onto their first-floor fire escape. My hands started shaking somewhere near the third floor. At the top, this guy recognized me through his window and let me in.” Before she could explain what she was doing, he asked if he could get a picture. “I had just done Kelly and Michael that morning, so I was in full hair and makeup.”

Originally set to run in the New York Marathon for Every Mother Counts (EMC), a nonprofit founded by supermodel-turned-activist Christy Turlington Burns, Carpenter put her efforts into something even more pressing when Hurricane Sandy cancelled the event. “I woke at 8 a.m. [on the day the marathon would have taken place] and went to Queens to volunteer in Rockaway with my Marine friend, Zach, and some other guys who are involved with this great disaster-relief organization called Team Rubicon,” she says. “The first house we visited, we did a week’s worth of work — picking up debris, digging out sand, tearing down walls in just a couple of hours. It was disgusting, gross and hard, but no one stopped. I don’t think we even took a water break.”

She’s gorgeous, strong, caring and talented, but did you also know Carpenter has a favorite (awesomely bad) workout song? “I love old-school Britney Spears, especially ‘Toxic.’ I’m listening to it right now in my head. I like running to music when I know all the words.”

The ravishing runner would also like to run alongside fellow actor Peter Sarsgaard one day. “He is writing and directing the film adaption of Christopher McDougall’s best-selling book Born to Run. I’d love to hit the trails with him some time.”

5 hrs ago
by Jessica Toscano