Toby Past and Lisa Jordan’s trip down the aisle wasn’t exactly conventional. They said “I do” in Patagonia, Chile, with no one around but the judge and official witness. Oh, plus their friends participating via Facebook.

Related story Exactly How I Threw a Wedding That Cost Me Less Than $10,000 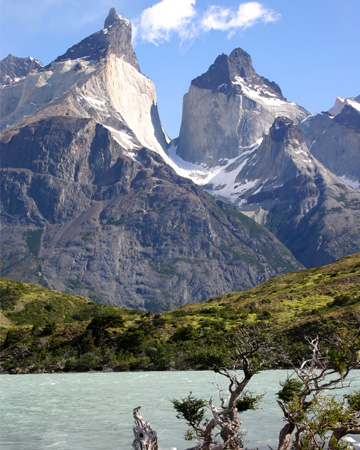 Avid travelers, Past and Jordan decided to turn their wedding into a dream trip to “the end of the world,” AKA, Patagonia, Chile. They wanted to get married surrounded by nature, just the two of them (other than the judge and official witness).

“Our whole relationship over the past 10 years has revolved around big adventures,” said Past about the decision to marry so far away. They visited Paris, Amsterdam, Mexico and the Virgin Islands as well as road tripping around the U.S. before deciding to tie the knot in Chile. They left for their three-week Patagonia trip on Feb. 5.

Explaining it to friends and family

It’s not surprising that the first reaction of loved ones was shock. At first, family and friends were upset they wouldn’t be able to participate in the ceremony. But after they explained what they wanted — a private, spiritual experience instead of the big production of a traditional ceremony — everyone was much more understanding.

To include the people they care about, Toby and Lisa created a Facebook page that they updated in real time (as long as WiFi was available) throughout their trip and actual wedding ceremony on Feb. 13. They created their Facebook page using the movie template, “because it’s a story we’re trying to tell. I looked at a variety of other platforms. Nothing comes close. Facebook is the best platform. This signifies us [uniting] our lives together. We wanted the digital representation of us bringing our lives together.”

About six months out of his first marriage, Past moved to Atlanta. While he was out with a friend at an art party, he noticed Jordan walk through the door. “It was like somebody dimmed all the lights in the place and threw a spotlight on her,” he says of the night they met.

A friend explained that Jordan had a boyfriend, but Past still wanted to be introduced to her. The two fell into a conversation and talked for an hour and a half. “It was an electric moment. There are times you meet people in your life and you feel like you’ve known them for years before. I just kept thinking it was too bad she had a boyfriend,” he explains.

Past ended up giving Jordan’s boyfriend his business card at the end of the night because he worked in a similar industry, but it was Jordan who called him a month later and asked if he wanted to get a drink and talk some more. “We have been together basically ever since.”

The actual wedding ceremony was held Feb. 13. They would have preferred Feb. 14 — the official anniversary of their first date — but the judge they needed to perform the ceremony was only available on the 13th. Not everyone can (or wants to) trek to Patagonia to perform a wedding ceremony. But the date wasn’t nearly as important as the experience.

“For us, going out into nature is not just a fun experience, it’s a spiritual experience,” says Past. Having been married before and having had a traditional ceremony, he craved something different and special for him and Jordan. “Having that traditional experience, there’s nothing wrong with it, but it’s so not about you. It’s about everybody else. We wanted this to be about us. Once we explained that to our friends, they understood.”

Honeymoon travel guide to Chiang Mai, Thialand
Is a winter wedding for you?
Packing in a piece of “You” for your destination wedding