Whether you’re a whiz in the kitchen or an amateur like me, cooking with your significant other strengthens your bond and makes your new place feel like home. 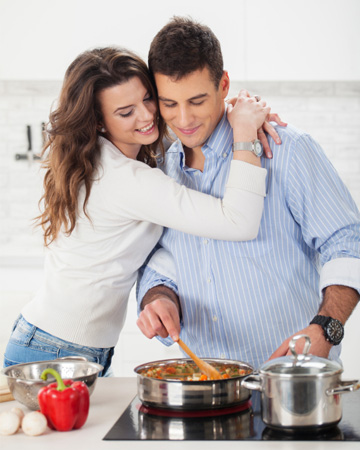 I’ll be the first to admit that I’m no Betty Crocker. In fact, the extent of my cooking experience before I met Kenny basically consisted of me heating up Lean Cuisines in my microwave. Oops, guilty!

Sure, I’ve made the occasional slice-and-bake cookies for kids I’ve babysat in the past. And I’ve tried my hand at cooking up frozen pizzas, but never anything that actually required me to use a recipe — or my brain, for that matter. 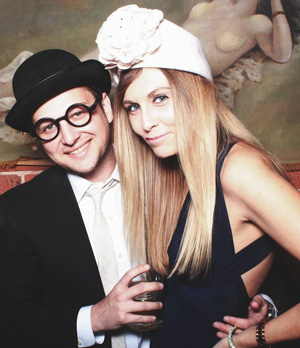 The author and her boyfriend, Kenny.

Kenny, on the other hand, is the designated chef in our casa. And by chef I mean we mostly buy Trader Joe’s pre-packaged meals, but he’s the one who oh so sweetly sticks them in the oven, pot or whatever, adds some spices and prepares them for us.

Lately I’ve decided that I need to get in on the action, however (and also because he’s been more or less begging me to). So we recently whipped up our first home-cooked meal together, which I found straight out of the kid-friendly recipe book my mother gave me last year. Yes, clearly she’s well aware of my handicap in the kitchen, duh! The experience was so much fun, and now I finally have some fabulous pointers I can relay to you guys.

By the way, our pork tenderloins and homemade applesauce turned out amazing.

Tip #1: Pick out a recipe that excites both your taste buds

In general, I’m a little — okay, a lot — more picky than Kenny. He can pretty much eat anything, although he does have a weak tummy, as he likes to call it. But rest assured, as there’s bound to be a certain meal that you and your honey can both agree on. For starters, I highly recommend checking out Pinterest for some food inspiration. If, like me, you’re new to this whole cooking thing, invest in a kid-friendly recipe book (I now swear by them, seriously!) or go online and Google “quick and easy meals.” You’re guaranteed to find something using one of these methods.

It may sound silly, but if you’ve ever watched Top Chef or any other cooking show where contestants occasionally must work in teams, you’ll notice how the ones that do best are typically the ones that communicate the best, not the ones at each other’s throats. Keep your calm, and divvy up specific tasks before you begin cooking. For instance, who will chop up all the vegetables? Will he be responsible for one dish and you the other? Talk it out, and don’t be afraid to ask each other for help as you go along.

Tip #3: Be willing to compromise

Along a line similar to communication, you also need to be willing to compromise. Me? I’m a stickler for playing by the rules, so when it comes to cooking, I like to follow the recipe I use word for word. My boyfriend is the exact opposite. He’ll add in random things the recipe doesn’t even call for. And to him, ingredient amounts are just mere suggestions. I almost threw a fit (don’t do this!) the other week when he wanted to add more garlic to our pork tenderloin marinade. But then I okayed the idea of him using only one and a half cups of apple cider instead of the suggested two. Hey, you can’t win ‘em all, and compromise is the key to keeping the peace and enjoying yourselves while cooking.

There’s nothing more discouraging than a belittling partner in the kitchen. Stay positive, offer a ton of praise and let him know if his tenderloins totally rocked your world (and make sure he does the same!). The more encouragement and compliments you dish out, the more fun you’ll have cooking together and the more you’ll want to do it again.

More moving in with him advice

18 hrs ago
by Ashleigh Morley