My name is Sarah and my husband, John, and I eloped in Las Vegas on May 21, 2011. We both agree that eloping was one of the best decisions we ever made — and here’s why! 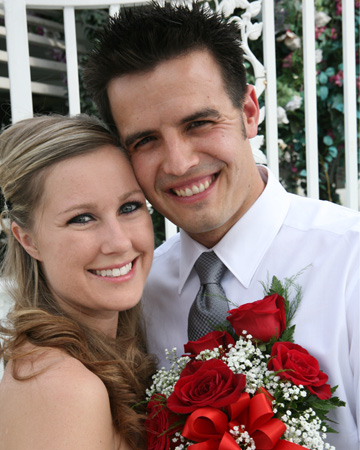 I’d first like to say that I have absolutely nothing against traditional weddings. Choosing when and where to get married is a personal choice only you and your future spouse can make.

I respect those who have traditional weddings and those who choose to elope. There are advantages and disadvantages to both, just like with anything. That being said, my husband and I chose to elope, and we wouldn’t have had it any other way. It was, by far, the best decision we made for us.

John and I met in 2007 but didn’t start dating until July 21, 2009. We fell in love quickly and decided to move in together in March 2010. He quickly became my best friend, the one I wanted to be around 24/7 and the one I wanted to grow old with. Together, we went on nine different trips in a little over a year, made dinner and played games nightly and quickly fell into our own little routine of life. Sounds cliché, but we knew we had something special, and nothing made me happier than simply being with him.

In March 2011, John got down on one knee and asked me to spend the rest of my life with him. I happily said “yes” and couldn’t wait to make our relationship officially official.

Wedding planning… or not

After getting engaged, I did what any girl does: started to plan our wedding. Only, quite frankly, I hate planning large events, I hate spending large amounts of money and I don’t like being the center of attention. Also, as selfish as this sounds, I wanted John all to myself on our wedding day. I wanted to have fun with just him and truly have the day be just for us.

Let’s back up a little. One of our favorite things to do together is gamble in Vegas. I know, I know… I just said I hate spending money, and that’s true, but I also like winning money (or should I say, having a chance at winning money). We budget a certain amount and are able to make it last our entire trip. We had been to Vegas twice together before and had such a blast that I knew we would have the time of our lives if we decided to get married there.

By this point, I hadn’t done much wedding planning at all. The least expensive thing I was able to find was around $7,000, and that didn’t include my dress or any of the little things. Yes, we could have had a backyard wedding and done plenty of DIY projects, but again, that requires planning — which is something I don’t like. One morning on my way to work, I called up John and suggested we elope in Vegas, just the two of us. It could be our wedding/honeymoon, and we could use the money we had saved up to put a down payment on a house. Thankfully, he loved the idea and asked when we should go. I thought about it for a minute and realized that the 21st (our dating anniversary) fell on a Saturday this month, so chose to do it on May 21 (which was two weeks away!).

Now that we had a date in mind, the next step was to tell our family and friends. I could tell our moms would have preferred a traditional wedding, but, honestly, they knew that this is what John and I wanted and what would make us the happiest. My dad seemed thrilled at the idea because, let’s be real, eloping is significantly less expensive than having a traditional wedding! 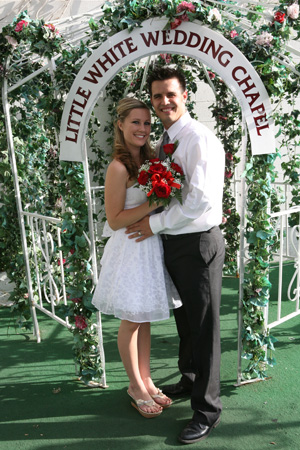 We searched for wedding chapels in Las Vegas, and both loved A Little White Wedding Chapel. It was quaint, affordable and had good reviews. We called and booked our wedding for Saturday, May 21 for $300 — including photos and flowers. Now this was right up my alley! I didn’t quite know what to expect or what we were getting ourselves into, but to me, it didn’t matter. All that mattered was I was getting to marry John.

John and I had arrived the night before, so we spent the day getting ready, relaxing in the hotel room and just genuinely being excited that we were about to be married! We arrived at the chapel and were immediately handed our flowers and whisked away to take photos. One thing’s certain — they don’t waste any time. Plus, they are good at what they do. After photos (both indoor and outdoor), we met with the pastor who would be marrying us. We chose to have a standard Christian ceremony. I walked down the aisle to the love of my life, tears flowing from the both of us, and we were pronounced husband and wife. It was honestly an extremely special and romantic ceremony, much to my surprise.

After the ceremony, we got a limo ride back to the hotel. We were on cloud nine and couldn’t wait to celebrate as newlyweds… just the two of us. We had dinner at the Top of the World Restaurant at the Stratosphere Hotel, followed by a night of blackjack, slot machines and drinks. To some, this may not sound romantic, but to us, it was perfect.

If we could go back in time, would we do it again?

In a heartbeat. John and I both have no regrets about our decision and hope to one day experience it all over again by renewing our vows. A wedding doesn’t make a marriage — a marriage is based on love, commitment, respect, friendship and communication. With the money we saved, we were able to purchase our first home later that year. We’ve now been married almost two years and have a beautiful 9-month-old daughter. To us, the wedding didn’t matter, it was the marriage and the life — with each other — that we wanted.

What’s your opinion on eloping? Share in the comments below!

3 Ways to take your marriage from good to great
Is newlywed bliss real?
3 Ways to boost your bond as a couple