Studies have proven it again and again! The key to any happy, healthy relationship when you live together is sharing responsibility around the house and feeling like you’re both equals. So how do you divvy up the chores in your casa? Here are a few methods that help my boyfriend and me not claw each other’s eyes out. 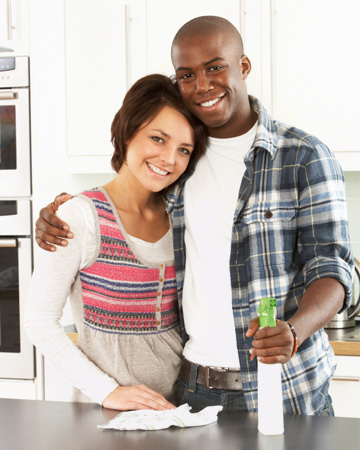 Figure out who likes what chore best

Or rather, who is willing to do what! For instance, in our house, I’m not the cook. Call me crazy, I know, but I just don’t enjoy it. My boyfriend, on the other hand, doesn’t mind whipping up a good meal every once in a while (or, er, every night) so he takes care of that one. After dinner, I typically handle the cleanup process, carrying our dishes to the kitchen, scrubbing them (if need be) and sticking them in the dishwasher before wiping down all the counters and cleaning up the crumbs and sauce spills he left on the floor. Me personally? I can’t stand a mess, but since he couldn’t care less, it works out perfectly.

Chores suck. Unfortunately, there’s no way of getting around them. They have to be done. A little tip I’ve learned thus far from living with my guy though is it’s a lot easier (and way more awesome) if you just tackle them together. Set aside a couple of hours a week and dust, pick up, vacuum, do whatever needs to be done around the house while blasting music and goofing off together. Then reward yourselves with something fun, like popcorn and a movie or a dinner out — whatever you enjoy. You can also split certain chores throughout the week to help ease the load, such as laundry and the dishes. Have someone put them in, and the other put them away. You catch my drift…

Trade off doing the chores you hate

Thank goodness my man and I now have a dishwasher, but when I was staying at his place several nights a week before we moved in together, we had to wash everything by hand. It was a chore we both despised doing and would avoid until things started to get really gross in the kitchen and pile up. As a result, it became kind of an unspoken agreement that if he did them one night, I would do them the next time and vice versa.

Don’t make yours an unspoken agreement though. Sit down with your guy and actually talk things out. Then come up with a plan of attack for tackling those chores you both can’t stand. Trust me — if one person ends up doing it every time without fail, it’ll cause a ton of resentment and tension in your relationship, which you clearly don’t want.

9 hrs ago
by Morgan Sullivan

17 hrs ago
by Sara Lindberg