Shows like The Real Housewives franchise provide an entertaining escape from our own reality, but what effect does watching women behave badly have on us? 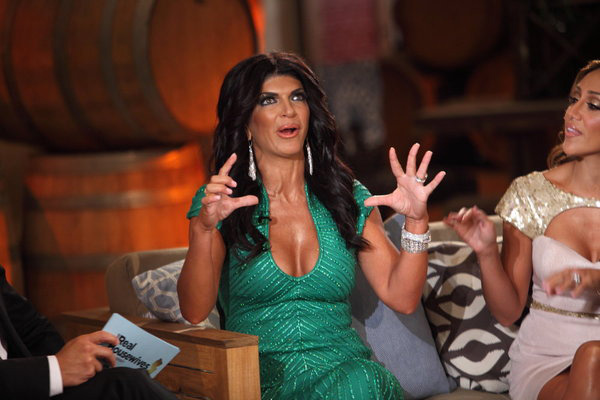 When Teresa Giudice lost her temper with a cast-mate on the first season of The Real Housewives of New Jersey, it was the table flip heard around the world.

But exposure to this type of volatile drama isn’t always detrimental to our well-being, especially when it’s purely voyeuristic.

Confidence coach and licensed psychotherapist Karol Ward explains that reality shows can bring up feelings for women that range from “I wish I had that life” to “This is just hysterically funny.”

“While they are depicted as reality, these shows are provided as entertainment and depict a heightened sense of drama and intense interaction amongst the cast,” the author of Find Your Inner Voice (Career Press) adds. “For many women watching, it’s a relief to look at the train wreck of someone else’s life.”

Watching reality TV stars cope with health, relationship and family issues can also point out when we need to take better care of ourselves.

Dr. Ramani Durvasula, a licensed clinical psychologist and co-host of the Oxygen series My Shopping Addiction, says that reality TV has become “a modern town square where people learn and exchange information in a world where they don’t always know where to turn.

“Many women have gotten life-enhancing and health-preserving information from reality programming,” she says. “It can serve as a wakeup call for issues they never realized [they needed help with].”

For example, Kenya Moore of The Real Housewives of Atlanta had a breast cancer scare while shooting the series. Her crisis showed how important getting a mammogram is for women 35 and older.

“When I decided to join the cast I knew that it meant that I had to expose some dark personal issues that I struggle with. One is that I have the propensity to completely block out hurtful things as a coping mechanism,” the former Miss USA shares in her Bravo blog.

“When my OB/GYN first discovered a lump in my breast during my annual exam, she directed me to get a mammogram. My experience was so unpleasant that I never told anyone or ever called back for the results. No woman wants to be told they could possibly have cancer. I thought the worst and took inventory of my life. Did I have my personal affairs in order? What if I couldn’t be treated? Would I have to undergo chemotherapy? Have a mastectomy? Lose all my hair? All these questions flooded my mind.”

Fortunately, the three lumps Moore’s doctor discovered were benign, and her health crisis helped her put pettiness in perspective.

“I realize that I have to live a less stressful life and not let people affect me the way they have,” she says. “At the end of the day, [things like] someone who intentionally maligns you out of spite, a man who tries to tear you down or my incessant worrying about my future don’t matter if I don’t have a life to live at all.”

“My road to sobriety hasn’t been easy, but I am fortunate enough to have a great support system,” Richards says in her Bravo blog. “I’m an admitted alcoholic and have been for many years. It is something that I battle with every day — a [private battle that] became public.”

The downside of reality TV

Whether it’s music, video games or television programming, too much negativity in entertainment can bring you down. But the effect reality TV has on your emotional health really depends on your own grasp of reality.

“In my experience,” explains Dr. Ward, “most women realize that the emotional fireworks they are witnessing on reality television are just that and understand it’s a show.”

However, she says if a woman is dissatisfied with herself or her current romantic relationship, she will find herself in conflict and fall into a “compare and despair mindset.”

“They will start to find fault with themselves and their lifestyle because they are not living the lives that the women on reality television are, even if the standard is unrealistic.”

Lisa Bahar, a licensed marriage and family therapist, says some women even go so far as to mimic the bad behavior they see on reality TV.

“Women are influenced by their peers, and what they are viewing is what they will mimic,” Bahar warns. “Being angry, catty and competitive is a hard perception to break, and many times it means learning how to be comfortable with oneself. [Unfortunately], that is generally not nurtured by these types of shows.”