ADHD meds often change a child’s personality — creating what many kids with ADHD (and their parents) refer to as a zombie state or making them more aggressive. But you can reduce the outbursts and increase attention span by teaching them skills they’ll take into adulthood. 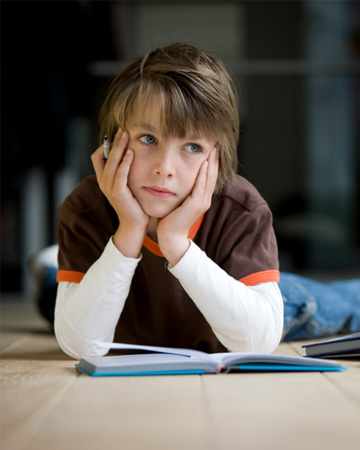 We sat down with Dr. Stephanie Golder, MA, ThD, a neurofeedback specialist at Dallas Brain Changers, who gave us all the details on helping your child with ADHD thrive without the use of medications.

SheKnows: It seems like when we were kids, every other kid in our classes had ADHD. In fact, some people remain skeptical of the diagnosis because of that — they think it’s just an excuse for laziness or bad behavior. What is ADHD and what are the symptoms parents should be looking for?

Stephanie Golder: What most people label as ADHD is often a set of symptoms that simply present like ADHD. If a child has trouble focusing, they lose attention easily and/or they have trouble sitting still, these are some of the key symptoms that lead to a diagnosis of ADHD. It is important to note that these are symptoms, not a diagnosis. Understanding that these symptoms are related to brain function is the first step to identifying the causes for the symptoms.

SK: What behaviors commonly trigger a parent to seek an ADHD diagnosis where none exists? Can other disorders mimic ADHD?

SG: Families and schools often look to an ADHD diagnosis when there are behaviors outside the norm that are not explained by a traditional learning disability. The real issue may be an underlying behavioral disorder, anxiety, depression, a learning disability or other brain function issues that mimic ADHD symptoms, especially in children. It is important to note that in these, as well as in other disorders, the symptoms of ADHD may be present. There are very specific brainwaves involved in a pure ADHD. Fewer than half of those who come to us having had a previous diagnosis of ADHD actually have a “true” ADHD. Most have other brain function issues that mimic the symptoms of ADHD.

SK: What’s the benefit to dealing with ADHD without medication?

SG: Medications for ADHD come with many side effects and can often cause an increase in agitation and/or aggressive behaviors, malaise; the child may “crash” when medication wears off or show a host of other symptoms. For instance, if the underlying cause of these symptoms is anxiety, taking ADHD medications is like pouring gasoline on a fire. By treating the symptoms without medication, there is a greater chance of actually affecting the true causes, rather than just the noticeable ADHD symptoms.

SK: What are the most common non-medication techniques for dealing with ADHD?

SG: Proper nutrition plays an important role in addressing symptoms of ADHD. Avoiding processed foods, refined sugars and simple carbohydrates, while increasing fruits and vegetables are some of the keys that can help the child with ADHD manage their symptoms a bit more effectively.

Neurofeedback is a very effective treatment for the symptoms of ADHD. Before treatment begins, your child/teen undergoes a qEEG, or brain map, to reveal which brainwaves are functioning outside the norm that may be causing or aggravating their symptoms. Then, through treatment, the brainwaves are retrained to function closer to the norm for healthier brain function. As this happens, symptoms become more manageable. Additionally, results of neurofeedback are permanent.

The most effective form of non-medication-based treatment for ADHD symptoms is a combination of the three approaches: proper nutrition, cognitive behavioral therapy and neurofeedback. Dallas Brain Changers is committed to treatment that includes all of the above. The positive results of this integrated approach are long-lasting, life-altering and permanent.

SK: We read in an interview in Men’s Health with Adam Levine, who’s a spokesperson for the “Own It” campaign raising awareness about adult ADHD, that he believes his practice of yoga has helped his focus and helps him “sit still.” While he didn’t link it specifically to his ADHD, it made us wonder if yoga, tai chi or other forms of exercise can help with symptoms of ADHD.

SG: Exercises like yoga are excellent, as the focus is on breathing and relaxing while working out. Cardio and other exercises are also good for those with ADHD symptoms, regardless of which brainwaves are involved, as all exercise builds dopamines and helps the body work off the unwanted neurochemicals that are related to symptoms.

SK: Is there a time when medication simply becomes a necessity?

SG: Occasionally, when seeking non-medication-based treatment for long-term results, if the medications are working effectively, it may be recommended that the child/teen stay on medications during the early stages of treatment. As symptoms improve with treatment, families work with their prescribing physician to begin weaning off medications. Medication temporarily affects symptoms. It is not designed to reduce or eliminate symptoms long-term. Dallas Brain Changers remains committed to reducing or eliminating the need for medication with treatment.

SK: How do you know what the best course of action is for each patient?

SG: There is no effective “cookie-cutter” way to treat the client and family who seek treatment for the symptoms of ADHD.… [We begin] the treatment process by obtaining a very detailed history of symptoms and issues through an initial evaluation. Additionally, we perform the qEEG, or brain map, on every client at the first appointment.

Based upon the results of the evaluation and testing, an individual treatment plan is developed for that client. Because no two clients present with exactly the same symptoms, history and brain map, every treatment plan is individualized for each client we treat in our office.

SK: They’re saying now that people may not actually “grow out of” ADHD. What are your thoughts on that?

SG: Because ADHD is a brain function issue, people don’t actually grow out of it. Sometimes, people develop coping skills that work effectively to deal with symptoms, but the brainwaves that originally caused the symptoms don’t change on their own. We often see adults in our office who had been diagnosed as children with ADHD and thought they had outgrown it, only to begin recognizing anxiety or other issues that are affecting their focus and attention abilities as an adult. It’s the same brainwaves that caused their symptoms as a child; only as an adult, due to life and stresses, symptoms may present differently and previous coping mechanisms no longer work.

Dr. Golder has more than 20 years in the field of education as a classroom teacher, reading specialist, and private homeschool educator. She has extensive knowledge of the framework and practices within specialized programs (both federal and state), including special education and 504. She has significant experience effectively working with troubled youths and their families. Dr. Golder is a trained interventionist and has facilitated drug and alcohol intervention teams within schools. She was trained by FranklinCovey as a Seven Habits facilitator. She developed a curriculum that has been used in the middle school classroom, and she utilizes these techniques with preteens and teens in counseling sessions.

During her life as an educator, teaching and counseling students and families, Dr. Golder developed an interest in brain function from childhood into adulthood. She began her counseling career by becoming a certified Stephen minister while working on her ThD in Christian counseling. She provides counseling to Christians and non-Christians alike; biblical emphasis is applied when counseling Christians. Dr. Golder believes counseling needs to be based on brain function and behavioral outcomes. To this end, she incorporates hemispheric life coaching into sessions with her clients.

Dr. Golder is mother to two beautiful young-adult daughters who have both benefited greatly from neurofeedback. She is very interested in nutrition, exercise and a healthy lifestyle.