In her new book Supermodel YOU, international supermodel Sarah DeAnna tells us how she maintains her gorgeous supermodel looks in a healthy way — and teaches us to do it, too! 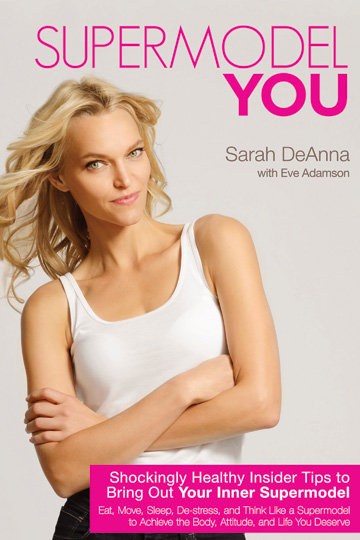 According to model (and now author) Sarah DeAnna, the myth of the eating-disorder-ridden supermodel needs to go the way of the scrunchie. We can’t help but agree that these negative portrayals of models torturing themselves to stay super-skinny likely have a negative impact on the eating habits of real women like us.

DeAnna says the key to becoming a supermodel is eating well, not dieting, and listening to your body. And to make sure we can all be supermodel citizens, she’s consulted with a slew of medical experts to put her own knowledge and experience on paper for the rest of us. We sat down with her to chat about her new book.

SheKnows: What inspired you to write this book?

Sarah DeAnna: When I first started modeling, traveling and living in model apartments, there was a lot of interest from my peers on how I was able to maintain my healthy “model body” yet I was always eating. In this industry, it is important to look your best; many models are told to lose weight or they stress about eating so they don’t gain weight. I became the go-to girl for many of these models who struggled with their body image. My agencies started having girls call and talk to me about how they can look their best while staying healthy. I didn’t always know the answer, but I was so passionate about health and fitness that I began learning everything I could about what affects the body and weight.

I learned that models and especially the general public believe that the only way to be “model-skinny” is to do it unhealthily. This couldn’t be further from the truth. In fact, the healthiest models tend to be more successful. For example, take a look at healthy super ”role” models like Cindy Crawford, Elle Macpherson, Amber Valletta, Carol Alt, Kathy Ireland and Claudia Schiffer, to name a few. These interactions, both in and out of the fashion industry, made me realize that instead of hiding from the stereotypes that all models have eating disorders and participate in other unhealthy behaviors (and for women to have a “model body,” they must do so), it is my obligation to disprove them. To me, this is not only important, it is necessary.

SK: Your bio says you gave up modeling for a while to write this book. Why was it so important to you to get this information out that you’d be willing to give up a lucrative modeling career?

SD: I never officially gave up modeling, but I did leave New York and quit going to the other major fashion capitals, like Milan and Paris, and moved to California. Many people, including my agencies in New York, Milan and Paris, believed I threw away a burgeoning modeling career and walked away from the opportunity that most girls would die for. Many of the girls I was shooting with, walking the runway with and living in modeling apartments with ended up becoming Victoria’s Secret angels, Sports Illustrated girls and other huge models, but I followed my heart and my passion, and it is in this book and in this message. In California, despite doing less than glamorous modeling jobs, I was able to continue modeling and focus on writing this book.

SK: We hear you invented a word. Can you tell us what “skealthy” means?

SD: I’m a big nerd and made up a bunch of words in Supermodel YOU, like “modercize,” “modeltude,” “modeltourage,” and a bunch of other silly “modelogisms.” “Skealthy” was probably the first word I coined, which means skinny but still healthy. The original title of this book was Model Skinny, and people either loved that title or hated it. The word “skinny” can bring up a lot of negative feelings, especially when associating it with models. It was Lynn Grefe, the CEO of the National Eating Disorders Association, who really encouraged me to use a different word instead of skinny. And voila! “Skealthy” was born. I actually entered skealthy and a bunch of these other silly modelogisms into the Urban Dictionary.

SD: Modercizing is essentially exercising, but not in the traditional sense. It’s another one of those modelogisms I made up when I realized that so many models don’t exercise per se but they get plenty of exercise. This is because many models consider things like shopping, dancing and any activity they do as exercise. I found that most people get plenty of exercise without ever having to hit the gym. If you don’t actually make the mind/body connection and count your activity as exercise, then you won’t reap the benefits. There is a fascinating Harvard study on housekeepers that perfectly demonstrates this concept that I discuss in the book. Practically everyone modercizes, and this key will ensure that no movement you make goes unaccounted for.

Intuitive eating occurs when you eat the right amount of food in the right quantity based on your individual, unique needs. I do not advocate a specific diet regimen in Supermodel YOU, because no two people are the same or have the same nutritional needs and preferences. We have an intelligent and inherent knowledge within us when it comes to food and eating. The key is to get back in touch with that knowledge. Balancing the other keys I talk about in Supermodel YOU is what will allow your intuitive eating to kick back in.

SK: Models obviously get in a little modercizing while working the runway. And we don’t all have time for things like walks on the beach (or a late-enough wakeup call for clubbing). What advice do you have for stay-at-home moms or busy nine-to-fivers (especially those with kids at home, too)?

SD: The answer to this question is exactly what I want Supermodel YOU readers to take away. Modercizing is just a concept to get you to think about the way you define exercise. Stay-at-home moms especially get plenty of exercise. You can burn just as many calories, if not more, running after kids and cleaning as you do at the gym. But you need to make the mind/body connection and be “aware” of the fact that you are getting exercise. Awareness is actually the first key to Supermodel YOU. The average person burns more than 200 calories doing even light housework. For those who have more sedentary jobs, according to Dr. Oz himself, even small movements throughout the day such as fidgeting can add up to major health benefits as well as burn up to 300 extra calories a day without ever having to hit the gym!

SK: If we’re being honest, many of us thought models were constantly dieting. Why are you such an advocate of intuitive eating? What about people who are overweight? Does intuitive eating work for them, too?

SD: Models have to always be runway- and bikini-ready, so dieting, which generally causes weight loss followed by weight gain, isn’t an effective way to stay in top model-body shape. Sure, if a model knows ahead of time that she’s walking in the Victoria’s Secret fashion show or shooting for some novelty like the Sports Illustrated Swimsuit Edition, she might be a little more concerned with her eating and exercise habits leading up to that event, but that’s only natural. In general, models stick to a healthy lifestyle that keeps them bikini- and runway-ready all year-round.

Intuitive eating works for everyone, because we all have this inherent food intuition. Generally the more overweight you are, the further you are from your inherent intuition about what you should be eating and how much. Regardless, everyone, no matter what their size or age, can tap back into the eating intuition they were born with.

SK: Can you give us any teaser tips for intuitive eating?

SD: When it comes to weight loss, eating and exercise are the two dominant factors people consider. But it’s actually the other three keys that I talk about in Supermodel YOU that govern and regulate your intuitive eating and the energy you have to modercize or exercise. When you balance the other keys your body will naturally gravitate towards intuitive eating, as well as intuitive exercising or modercizing. We require certain things like air and water as a matter of survival. Eating and moving our bodies are also essential aspects of survival. Take, for example, key two, which is on sleep. When you get a good night’s rest, the hormones that control your appetite are balanced. When you skimp on sleep even for a night, the appetite-regulating hormones leptin and ghrelin go haywire. By making sleep a priority you will naturally balance these hormones and allow intuitive eating and intuitive modercizing to set in. Not only will your appetite hormones be in the proper balance, you’ll have more energy and naturally want to move your body more. This is law.

SK: It’s hard to see pictures of models in the magazines and not judge yourself, whether you’re 17 or 37. What should people remember when they see those photos?

SD: Everyone who looks at any image in a magazine or billboard needs to know that most of those photos aren’t exactly real. They are Photoshopped, airbrushed, retouched and are shot by professionals who know how to use lighting, angles and all kinds of other photo magic. As top model Russell Cameron shared in her recent TED talk, “the images we see of her do not reflect reality, but are careful constructions built by stylists, makeup artists and photographers.” And as Cindy Crawford so famously said, “Even I don’t wake up looking like Cindy Crawford.” Never judge yourself or compare yourself to another person in a magazine or in real life. Appreciate them for the beauty that you are able to see in them and know that that beauty is just a reflection of you.

Supermodel You is not about looking like Cindy Crawford, Heidi Klum, a Victoria’s Secret angel or any other supermodel or girl in a magazine or on TV. Trying to be or look like someone else is just a waste of being you! As movie star legend Judy Garland so famously said, “Be a first-rate version of you, not a second-rate version of someone else.” Scientifically and genetically speaking, there will never be another you, so why not be the most beautiful, sexy, healthy and confident version of yourself possible?

Supermodel YOU: Shockingly Healthy Insider Tips to Bring Out Your Inner Supermodel

Sarah’s new book drops on April 1, 2013. It will be available in bookstores, and eventually, online and for download on your tablet.

Sarah DeAnna has appeared in some of the world’s most influential fashion magazines, including Vogue, Elle and Marie Claire. She has modeled for runway shows and other events for renowned designers such as Dolce & Gabbana, Versace and Stella McCartney, and has appeared on Bravo, MTV, E!, TLC and ABC’s Good Morning America. For more info on Sarah DeAnna, check out her website.

13 hrs ago
by Charlotte Andersen