Blame it on Fifty Shades of Grey. Women of today might still hold traditional views about love and relationships, but when it comes to the bow-chicka-wow-wow, vanilla sex is out.

But are ladies as edgy outside of the bedroom as they are in? We surveyed more than 2,500 readers as part of our February Valentine’s Day Issue to get some hard answers. 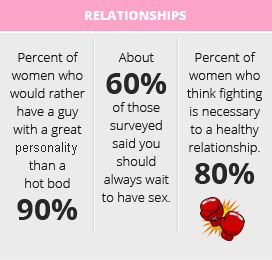 When it comes to being in love, women prefer to go the traditional route.

Earliest point at which the average woman says “I love you”: One month 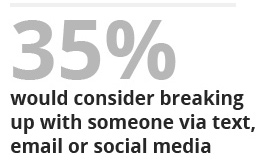 Number of women who would break up with a guy if he became overweight: 21 percent

Number of women who believe maintaining a certain body weight for your partner is important: Nearly 60 percent

About 40 percent of women claim to have cheated.

Is a guy’s salary important to you? 73 percent say no. 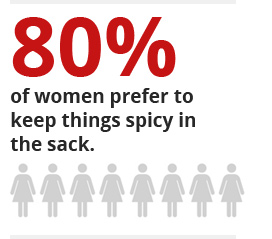 More than 40 percent said they never make excuses to get out of sex. Those who do blame stress and fatigue.

Most popular sex position: Missionary, with doggie-style in close second. Overall, women seem to like different positions but gravitate most toward “him on top,” whether it works for them or not. Speak up, ladies!

Desired duration of a good sex session: 30 to 45 minutes

Actual duration: Between 10 and 30 minutes

Average number of women who do not fake orgasms: 60 percent

Most popular place other than the bedroom to have sex: Living room

The majority of women surveyed say they look forward to Valentine’s Day. Only about 24 percent said it’s just another Hallmark holiday.

Should a guy always send flowers on V-Day?

The most the average woman will spend on a guy for Valentine’s Day: $100