Getting engaged is one of the most joyous occasions anyone can experience, especially during this time of year. However, in a recent survey by David’s Bridal, women confess that their beaus didn’t meet their expectations when it came to diamond size and proposals. 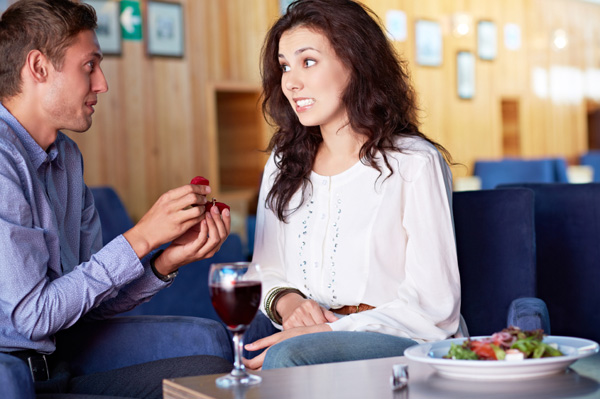 Not surprisingly, the engagement ring was the bride’s biggest complaint. The saying “diamonds are a girl’s best friend” holds true for many women. According to a survey conducted by David’s Bridal, more than half of brides (57 percent) would change something about their engagement ring if they could, with 19 percent of women saying they would want a bigger stone size. Some brides (36 percent) would even go as far as upgrading to a new one!

Grooms are apparently feeling the pressure to ”go big or go home.” Some of the extreme proposals are a little too much for most brides, though. Brides admit that they would prefer a smaller, more personal proposal versus an overwhelming one. According to David’s Bridal, 80 percent of women would cringe at a public Facebook proposal. Not only does it lack creativity, but all of her friends and family will see how unoriginal and cheesy it was. A jumbotron proposal also rated low in popularity with 63 percent of brides saying they wouldn’t say yes to such a plea. Even a flash mob proposal wasn’t so appealing, as 57 percent of brides said they would say no to it!

With Valentine’s Day being one of the biggest days for proposals, it’s interesting to know that one third of newlyweds actually exaggerate their proposal story to make it sound more appealing. Let’s hope our guys know what they’re doing before they pop the big question!

Grab your tissues: The best proposals on YouTube
5 Ways to propose to your man
The new way to propose

10 hrs ago
by Hannah Rimm

10 hrs ago
by Nadine Avola