You know how one minute you’re in a happy and fulfilling marriage and the next you find out that your husband of 20 years has been cheating on you with someone 10 years younger? Well, I do. 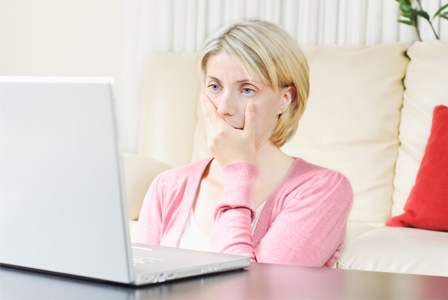 By now you may be familiar with the story of Mary Kay Beckman, the Las Vegas woman who sued Match.com when her date stabbed her 10 times and kicked her in the head. And you thought your date last Saturday night was a disaster?

Still, is Mary paving the way for many of us whose online dating experience didn’t go so well? Let me share my story, and you tell me if I have a case…

Those in a relationship need not apply

So I had been going out with this total meatball for over a year. One minute he was in love with me, the next minute he “needed his space.” And I tolerated his bulls*** because I was recently divorced, and plainly put, I was an idiot. Later I found out that this guy was sleeping with other women each time he told me “he needed space.” Gross.

It was a long-distance relationship and on the last occasion, he gave me the run-around. I drove home alone, on Valentine’s Day, five hours away. As I drove, the words of my friend telling me I really needed to register with an online dating service echoed in my head. Coincidentally, I had a writing assignment about online dating, so I thought “What the hell.” I had to do something to get over that tool once and for all.

Yes, this was during a time in my life when I had not yet gained an appreciation for just being single for a while. The next morning I woke up, went downstairs and registered with an online dating service. I got to try it for free, and I could keep my profile hidden while I “shopped” my possible matches. (I tried not to think about the guys who would do the same to me if I became a paying member. Eww.)

“This was fun!” I thought as I answered all those questions that it had been a while since anyone cared enough to ask me about myself (and yes, I realize I was being asked by a dating service that wanted my money. My love life had, indeed, become that pathetic.). I found a picture my talented photog friend had taken of me on my 40th birthday, and I was ready to stalk. Um, look.

Match.com had some interesting ideas about who they thought would be a good match for me. I like to do things outdoors, so I was matched with a lot of guys in sleeveless beer shirts with missing teeth. On page five of my matches, I saw a tall guy who looked vaguely familiar. I clicked on his picture. And. There. He. Was.

My boyfriend of over a year! That bast*** had a Match.com account! How long had he had it? Lord only knows. His profile said he had two kids. He has five. His age limit for compatible matches was 21-41. This is where I started to dry-heave. I was 41, he was 43. I have a daughter who was 17 at the time. So did he want to date my daughter instead?

Can he do that?

If I wasn’t already exhausted from the trip the day before, I would have gotten in my car, driven back across the state, knocked on his front door, junk-punched him with all my might, while screaming, (a la What Happens in Vegas) “You know why!”

I had nursed that pig back to health when he was sick. I had cared for his children as if they were my own. I had trusted him when he didn’t deserve it. Unlike Mary Kay, I didn’t sue Match.com for not notifying me that my boyfriend was registered with an online dating service. I decided to get even instead.

I would show him. We were a match. (I guess I have that one face-saver to hang onto. A computer database matched us, so I hadn’t been completely off in left field thinking we were a good match.) If I published my profile, he would see it.

That’s exactly what I did. I clicked on “publish” and stepped away from my computer, for eight hours. I came back to my computer, curious to see who had viewed my profile. I had 236 views. In eight hours. I had 17 emails. Now I felt sick to my stomach for a different reason. Why did I feel like a bunch of strange men were crowded around my dining room window, peering into my house with their pants down around their ankles?

My little plan of revenge had backfired. I immediately removed my profile (which he never saw). So if Mary Kay wins her $10 million lawsuit, maybe along with insisting on background checks and more prominent disclaimers, Match.com could also ask potential candidates if they are already in a relationship and/or sleeping with someone before they are allowed to register!