Extreme obstacle courses, like Tough Mudder and Spartan Race, are all the rage and continuing to gain in popularity. This year alone, more than 1 million people participated in obstacle races across the US. Women especially are embracing these unconventional challenges and showing that they not only have what it takes to compete, they’re having a blast doing it. 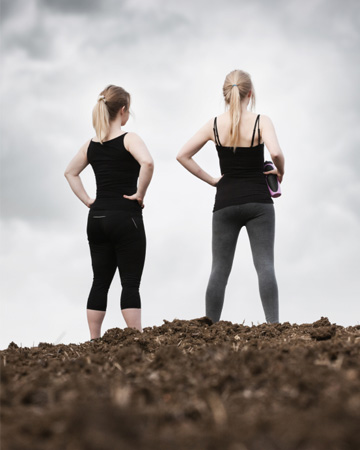 Ekaterina (Kate) Solovieva is one of these women and has been competing in Tough Mudder races since 2010. “I discovered Warrior Dash in 2010, and after watching their promo video, knew I had to do it.”

Women seem to be especially drawn to these events, something Solovieva has noticed. She notes that they make up more and more of the participants in Tough Mudders. “I think a big part of it is that strength is in. Along with ‘strong is the new skinny’ campaigns, women are embracing the free weights, the mud, the muscles, and are loving it,” she says. “Not only that, but they are also really good at it. At the World’s Toughest Mudder in November, women took two of the three top spots overall.”

Brett Stewart, author of Ultimate Obstacle Race Training: Crush the World’s Toughest Courses, agrees. “The explosion of popularity of these events is in no way just a guy thing. Women are quickly closing in and making up 50 percent of the field at most smaller events, and their participation is growing dramatically in the longer-distance events,” he tells us. “As a guy, I can honestly say that racing alongside women makes an event more fun.”

In general, Tough Mudders have an appeal that regular competitions don’t, and people of all fitness levels are getting involved. “It didn’t take long for guys and gals — weekend warriors and experienced athletes alike — to realize that obstacle races and mud runs held a little something for everyone,” says Stewart. He’s seen the growing enthusiasm for these ultra-tough challenges firsthand and has interviewed competitors of all kinds. “If you are fast, you could torch the course between the obstacles; if you are strong, you can muscle through the obstacles requiring lifting or carrying weights; if you are slight, you can scale cargo nets or ropes with ease; and if you are somewhat well-rounded in your physical strength and dexterity, you could progressively improve to dominate any course,” he explains.

Despite the difficulty level of most Tough Mudder courses, the benefits outweigh the pain, both physically and mentally. Since getting involved in Tough Mudders, Solovieva says her overall physical fitness has improved considerably. “You are forced to train in all aspects of physical fitness for obstacle races and you are using your whole body, so you need to improve not only your cardiovascular functioning, but also muscle strength and endurance, as well as agility,” she explains. Stewart adds that a sense of accomplishment also ranks high on the benefits list. “Even after being dunked in ice water, sent through endless mud baths, climbing, scurrying and jumping only to eventually be shocked — literally shocked — at the end, after 12 or so miles of torture, most finishers are beaming with pride and grinning ear to ear.”

What makes these challenges so tough?

They aren’t called Tough Mudders for nothing. These challenges are made to push you in ways you may never have thought possible. “In contrast to other obstacle racing events, Tough Mudder is known to capitalize on your fears: heights, electroshocks, water,” says Solovieva. For example, she’s claustrophobic, so for her the tight climbs through the tunnels underground are very challenging. “The first time I had to climb through a tight, dark tunnel, it took me few minutes to gather up the courage and then I ended up sandwiched between two friends who were talking me through it the whole way. After I climbed out, I broke down crying,” she tells us.

To get through the toughest parts, Solovieva makes jokes to keep things light despite the challenges. “The friends that I usually race with know that I’m tired if I’m starting to crack jokes. But that’s what gets me through,” she says. “I also strike up conversations with strangers and try to make them laugh. At one of the races, I casually mentioned that one of the obstacles involved live reptiles. I think they actually believed me.”

When it comes to training for a Tough Mudder, cardio is king, says Solovieva. “No amount of strength training will replace the ability to run for few hours straight,” she explains.

However, your training should involve more than just running, since a Tough Mudder challenge involves so many varied activities and movements. “You will be jumping over things, carrying things and dragging things behind you. So add some weight to your runs, throw in some burpees, do hills,” Solovieva advises. She also suggests doing some research on fueling for a longer event. “Most people do not know how to fuel properly, and that can lead not only to hitting the wall, but also to severe muscle cramps.”

Stewart also suggests watching a Tough Mudder or volunteering at a race first to learn about the nuances of the sport. “Tough Mudders are surely a spectacle to behold, and in order to not be overwhelmed with the immensity of the event on race day, it’s best to do some research ahead of time and be ready for your big day,” he says. “Volunteering also gets you as close to the action as you can be, without actually getting too cold, wet or muddy. Watching competitors’ tactics fail or succeed on obstacles will give you some tips for handling them yourself.”