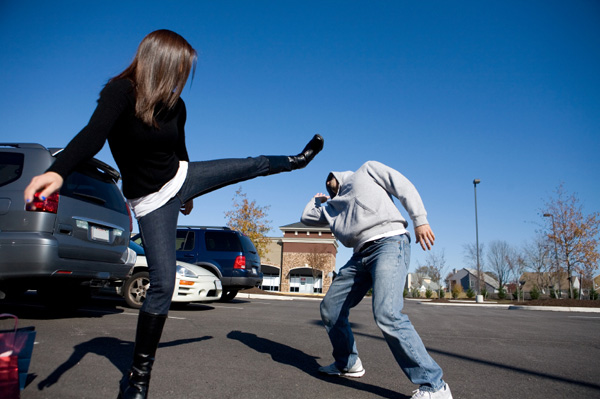 In line with Fricke’s recommendation to play the What If game and fill your mental filing cabinet with game plans to protect yourself when attacked, we asked the self defense expert to give us tips on how women can respond in perilous situations.

If you’re on foot and a man is following you

You’re out for an early walk and you suspect that strange man who’s been behind you for a few blocks is following you. What do you do? Fricke says to first make sure that the man is, in fact, following you. “Cross the street, maybe change directions, head down another street. If there are people around, make yourself part of those people,” he advises. “If you’re in a residential area and no one is around, walk up to someone’s door and ring the doorbell. If you need help, you need help.”

Fricke also stresses the importance of not letting the man get closer to you, even if he starts to ask you seemingly benign questions, such as whether you’ve seen his lost dog or you can help him with directions. “Do not let him close the distance between you and him,” he suggests. “Tell him to stop where he is using a loud, firm voice. You don’t want him to get within 21 feet of you because he can easily close that distance in a second or two and do you harm.”

If you’re being followed in a vehicle

You’re driving and suspect that you’re being followed. First make sure your car doors are locked and put any weapon or potential weapon on the seat next to you. Similar to the previous on-foot scenario, make sure you’re actually being tailed by turning onto different streets. If the car continues to follow, Fricke says avoid putting yourself more at risk by going home, to your business or anywhere that you’re known to hang out at. “Do not give the pursuer any intel on you that keeps you in danger now or puts you in danger later,” he adds. The self defense pro recommends calling 911 and driving to the police station or a crowded parking lot where you can yell for help and tell dispatch that you need to meet an officer because you’re being followed. Stay in the car until an officer is present.

Fricke says to remember that your car is also a weapon — a really good one. “If you’re being blocked by the attacker’s vehicle, drive into his vehicle. If he is out of his vehicle, run him over, then drive away and call the police.” While you’re being pursued, Fricke says to be aware of your surroundings so you don’t end up causing an accident or hitting pedestrians.

If a man approaches you

You’re walking to your car in the dark and a man menacingly approaches you. There is no question he means to do you harm. Fricke says to be prepared to use a loud, strong voice and tell the man to stop as soon as you recognize he is coming at you. “Make it known you are not an easy target and it may deter him because he doesn’t want a challenge or attention from bystanders,” says Fricke. “If he doesn’t walk away, turn to your weapons.”

Fricke recommends always carrying pepper spray in your hand so you immediately have a deterrent. If you don’t have pepper spray at the ready, consider other weapons, such as pens, hair brushes or anything that you can gouge into the attacker’s eyes. If he can’t see you, he’ll be less likely to hurt you. If you impair your attacker, you have the opportunity to run away. Escape as fast as you can.

If a man grabs you in a bear hug

“The most important thing in this scenario is to not panic and keep your head clear,” says Fricke. “Think about how you can inflict harm on your attacker, such as pinching his testicles and squeezing until something pops. Do not let go until he is disabled.” If you’re grabbed from the front, do whatever you can to loosen your attacker’s grip, such as knees in the groin, head butts into his nose, spitting in his eyes or scratching his eyes, if your arms get free.

Fricke says “If you have a weapon, such as a knife in your purse or pocket, try to get to it and use it;  keep stabbing and cutting until your attacker lets go. Be prepared to inflict pain or you may not survive the encounter.”

If an attacker knocks you to the ground

If you can’t immediately get back on your feet, make sure you maneuver your body so you’re on your back and can use your legs as weapons. “Bring your knees in and kick hard to keep him off of you,” recommends Fricke. “Kick his crotch, shins and knees, or, if you can, drag your shoe or boot heel down his shin to weaken him and dissuade the attack.”

Note: Try to impair your attacker so you can escape or look for another weapon to defend yourself with.

If a man tries to drag you into a vehicle

This ranks high on the scary scenarios list because most people who are constrained or confined do not live to tell about it, according to Fricke. In this situation, immediately scream for help to deter the attack and get attention from bystanders who can come to your rescue or call 911 to alert authorities. Fricke says this is one of those situations in which you fight until you are no longer able to fight or until you are able to disable or escape from your assailant. “Just go nuts and use whatever means and weapons you have to disable your attacker from seeing, breathing and/or thinking. You fight with full force because your life may depend on it,” stresses the self defense expert.

If a man approaches you with a knife or gun

Not able to get away? Have you already been injured? Regardless of your condition, always have the goal to disable your attacker from seeing, breathing or thinking. “Sling your own blood in his eyes, if you can. It sounds gross, but it can be effective in helping you escape or fight back,” says Fricke.

Ultimately, situations with guns and knives have to be handled on a case-by-case basis. Fricke says if a man is trying to rob you, by all means, give him your purse, wallet, or jewelry — it’s just stuff and not as important as your life. If the man is threatening you with a weapon and wants you to get you into his car, you may be scared of getting cut or shot but getting in the car may also mean you getting killed. “Fleeing may save your life,” Fricke emphasizes. “You can lose a lot of blood before you bleed to death, so do everything you can to keep fighting or running — do not give up your fight or flight just because you’re hurt.”

If your attacker has a gun, your first priority is to get out of the way of the bullet. In close contact, push the gun away from you and do something retaliatory, such as gouge your attacker’s eyes with your thumbs. Fricke also advises that you run away, if possible, but don’t flee in a straight line. “Run in a zig-zag or get behind something so you aren’t an easy target,” he explains.

The bottom line in self defense is to have the right mindset. Fricke highly recommends that women carry a gun or other weapon, know how to use it and be prepared to use it if attacked. Become a force to be reckoned with because it may just save your life. He says, “The more dangerous you are, the safer you are. And keep in mind there is no fair fight when you are attacked. You take every advantage you can and use every ounce of your energy to overcome your assailant or until you hear ‘Welcome home, and well done good and faithful servant.’ “

The best way to defend yourself and save your life is to take a proactive approach and prepare yourself mentally and physically. Don’t become a statistic of violence or abuse. Alpha women get prepared and fight back.

Today on the Daily Dish, Tracy and Charley Vega give important tips on how women should be alert and safe when traveling.

Safety Tips When Traveling – Daily Dish
Today on the Daily Dish, Tracy and Charley Vega give important tips on how women should be alert and safe when traveling.