You’re on your morning run when a man grabs you and starts dragging you into an alley. Worse, your boyfriend or spouse goes into a rage and threatens to do you harm. Are you prepared to fight back? If not, you could lose your life — but you can learn to effectively defend yourself. SheKnows talked with Dale Fricke, founder of Alpha and Omega Tactical Training Concepts in Bozeman, Montana, to find out the best self defense tactics for women. 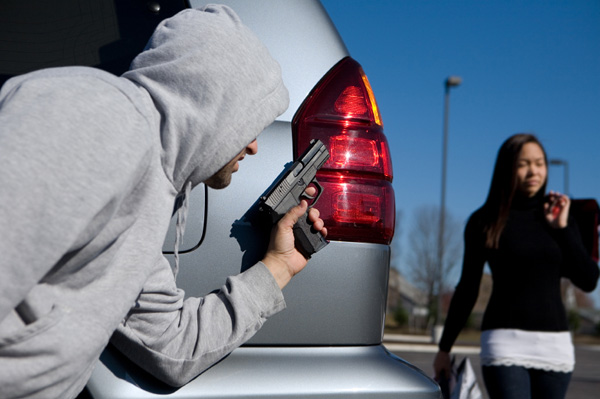 No woman wants to find herself in a dangerous situation, but it happens. According to the Rape, Abuse and Incest National Network (RAINN), someone in the US is sexually assaulted every two minutes, while the National Network to End Domestic Violence (NNEDV) reports that three women die every day as a result of domestic violence. Fricke, who has been teaching firearm use, tactics and self-defense to police, military and civilians for 25 years, wants women to be prepared to defend themselves when in danger. He says, “You must be dangerous to stay safe.” You can’t put your head in the sand and be in denial that bad things can happen to you. Choose not to be a victim and take some simple steps to prepare yourself to fight back.

Before you learn the hands-on skills of self defense, you must change the way you view the world and, perhaps, make changes in your lifestyle so you can reduce your risk of being attacked. “Every place is safe until it isn’t,” says Fricke. “You don’t know when danger will strike, so take precautions.”

The self defense expert says you should learn to be keenly aware of your surroundings as a proactive means of protection. Don’t text or wear headphones with loud music while you’re at the park or other public place. Keep your head up and know what and who is around you. Keep a clear head while you’re out and about. “If you’re consumed in thought about stuff, you won’t be as alert,” warns Fricke. “Being aware of your surroundings will help you see or feel if someone is preying on you.”

Do you really need to run errands or go for that jog by yourself at night? One of the best ways to stay out of danger is to avoid it. “First of all, don’t put yourself in dangerous situations, such as dark alleys, bad areas of town or late-night places where trouble tends to lurk,” states Fricke. “Be wise when making plans to go out.” He also recommends women not go out alone. “Strength in numbers is an applicable principle when it comes to your safety.”

If you are in danger at home or are in an abusive relationship, get out and get help. Even if you’re just being emotionally abused or he just pushes you around when he’s mad, don’t minimize the danger you are in. You never know when the abuse can become life-threatening.

Prepare your mind to fight back

Fricke says you need to go over scenarios so you’ll have a game plan in case you are attacked. The best way to do it is by playing the “What If” game: What if I’m being followed? What if someone grabs me by the arm? “Your mind is like a filing cabinet and will instinctually go to the fight-or-flight file if you’re threatened in a dangerous situation,” Fricke explains. “If you have nothing in there, you are going to freeze and do nothing to protect yourself. Prepare your mind by thinking things through.”

Being aware of your surroundings is key to being alert to a potential attack and getting away or preparing to attack. Carrying a weapon or knowing how to use non-weapon items such as things in your purse or lying on the ground that are within your reach is another crucial factor in surviving an attack. Fricke recommends that women arm themselves with a handgun, dagger-type weapons like knives and/or pepper spray and know how to use them.

Other items that can do damage to an assailant include pens and flashlights; even perfume, hair spray and cigarette lighters can become a means of self defense. “Ink pens can be used like a dagger, flashlights can be used as a blinding device and an impact weapon, and any spray-type items can be used to blind attackers,” Fricke says. “Your goal is to impair an attacker’s seeing, breathing and thinking so you can escape.”

According to MSN.com, based on polling research and gun-sale statistics, an estimated 15 million to 20 million women in the United States own their own firearms. Fricke, who owns Dale Fricke Holsters and makes custom holsters as well as holster purses for women, strongly urges women to own, carry and know how to use a handgun. “For women, a handgun is your best defensive weapon, but you must get training and be comfortable with your gun,” he explains. “Further, you must train your mind with what-if scenarios where you see yourself victorious.”

Fricke recognizes that many women may be uncomfortable carrying a firearm or using one. “If you know in your heart, mind and soul that you can’t shoot someone, do not carry a gun because it will become a liability to you,” he warns. “However, if you feel confident about a gun, get the proper training and permit to carry, if needed in your area, and become competent in operating your weapon.”

Fricke is also the assistant pastor at Calvary Chapel Bozeman in Bozeman and understands the inner conflict most people feel about taking someone’s life. He is vehemently against senseless violence and wants women to be able to protect themselves from it, even if it means fatally wounding an attacker. He explains, “Those who do evil bring judgment upon themselves. If you take a person’s life because he or she is trying to take yours, it’s on them.”

Up next: Self-defense moves that can save your life >>