Ahhh, holiday traditions: egg nog, brightly wrapped gifts… and nosy relatives asking why you haven’t found a man yet. This year, when Uncle Steve gets into the rum punch and lobs a bunch of questions at you about your dating life, you’ll be ready. Just follow this handy list of humorous responses to: “Why are you still single?” 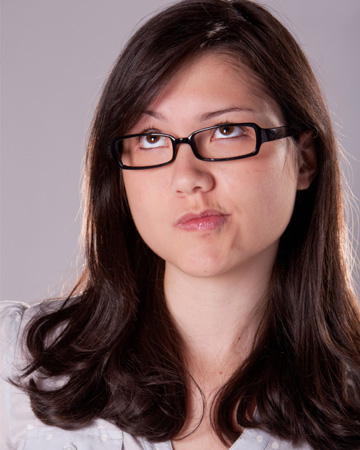 When someone asks why you don’t have a boyfriend and/or when you’re getting married, use these tongue-in-cheek scripts:

Look extremely confused and say, “But… I do have a boyfriend. See?” Reach into your pocket and pull out a folded picture of Harry Styles from One Direction that you tore out of Tiger Beat. Look at it wistfully and say, “I’m just sad he couldn’t be here for the holidays, because his band is touring and everything. But we’ll be together soon. Oh, P.S.: I might have to move to London at some point.” Then give the photo a nice, sweet kiss. Look satisfied with yourself. (Optional: Sing a few bars of “What Makes You Beautiful” to Harry post-smooch.)

The “So little time, so much criminal activity to do” excuse

Say: “Oh, I’ve been so busy lately there just aren’t enough hours in the day to date!” Then, lean in and conspiratorially whisper, “Did you know there hasn’t been a truly great bank heist pulled off by a woman since the Barbie Bandits in 2007? Well that’s about to change…” Sit back in your chair, take a long pull from your glass of Cold Duck wine, and cackle to yourself. Watch the other person back away slowly.

Look the person in the eye and say, “Who needs a boyfriend when I can have all the casual sex I want with guys I meet on Craigslist?” Use caution with this joke, though: Works best in free-thinking households where you won’t be tossed out onto the snowy porch for daring to crack wise about engaging in premarital fornication.

Hat tip to Katherine Heigl as Jane in the movie 27 Dresses for inspiring this comeback. She had the ultimate single-girl line when she replied to an aunt who said, “Must be so hard to watch your younger sister get married before you” with “Yes. Then I remember that I still get to have hot hate sex with random strangers and I feel so much better!” That’s a classic.

Act indignant and say, “Don’t you think it’s a little insensitive to ask me about my marital status when so many other people in this country who already have romantic partners aren’t allowed to wed legally? Let’s address the real problems in this country before we get the CIA involved in my love life, shall we?” Insert disparaging comment about General David Petraeus’ fidelity problems here. Wait 0.3 seconds for one of your drunk uncles to take over and steer the political conversation from this point on. (You might want to re-fill your tumbler of whiskey before he starts in, though.)

Why going solo during the holidays rules

In all seriousness, though, being single this time of year is pretty sweet for a bunch of reasons: First, not having a significant other with you means you won’t have to worry about a.) him saying something your family will either find offensive or won’t understand and b.) your dad/grandpa/aforementioned drunk uncle trying to “test” your guy via either sports trivia, physical challenges or awkward questions about his religious background.

All of that nonexistent stress means one thing: You’ll get more uninterrupted time to spend with your family and friends. It’s the little things like cooking in the kitchen with your mom, checking out a big-budget action movie with your old crew the day after a major holiday or having a marathon videogame session with your cousins that you’ll remember for years. Trust us: You have plenty of time ahead of you to do couple stuff (like fighting over whose in-laws you’ll see this year — fun, right?). Go ahead and enjoy your 2012 holiday season selfishly.

At-Home Exercise Equipment Every Fitness-Lover Should Own