Roger has been acting very differently lately, and his wife, Samantha, is convinced that he’s hiding something. He just hasn’t been himself; he’s been moody and quick to argue with her and avoids eye contact when she asks him what’s wrong. 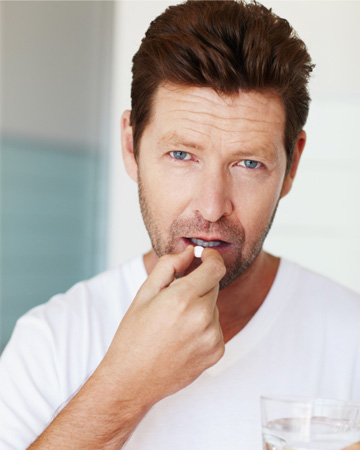 He’s also been eating less, and she catches him nodding off from the moment he gets home from work. Convinced that he’s lying to her about something, she accuses him of having an affair, which he vehemently denies.

The truth of the matter is that poor Roger isn’t having an affair — at least not a traditional love affair. But he is indeed in a relationship that he’s gotten in way too deep with: Roger is a closet prescription-pill addict, having become addicted to the Vicodin pain pills that he was prescribed after his back surgery. A successful vice president at his insurance company and a Little League dad, Roger certainly doesn’t look the part of a drug addict; but if he doesn’t take his pain pills every few hours, he’ll begin the unpleasant withdrawal process that most addicts know all too well.

Roger, like a growing number of unsuspecting men and women whom I treat, innocently fell into the black hole of drug addiction to pain pills. For other unsuspecting adults, anxiety medications like Xanax or Valium or sleep meds like Ambien are the gateway drugs into the horrible world of addiction.

The problem with pain pills (usually opiates) or anti-anxiety meds (usually benzodiazepines) is that if you take them consistently enough over a long enough period of time (sometimes for as little as several days), you will develop a physical dependency to those pills — and there’s no amount of education that can stop that inevitable neurochemical process from occurring.

Prescription drug abuse is on the rise

Unfortunately, I’ve seen this process many times before. As the clinical director of the Dunes, a high-end holistic rehab center in East Hampton, New York, I’ve seen addiction increasing in epidemic proportions, oftentimes with successful, educated people like Roger who dance with opiates a little too long and then get hooked.

Tune into to your husband, pay attention and look for the following eight tell-tale warning signs:

8 Signs Your Husband May Be Abusing Pills

Just because a drug is prescribed doesn’t make it safe

Why? One reason is that prescription pill patients are simply not adequately warned by their physicians about the addictive potential of the drugs that they’re being prescribed. Many psychologists have also attributed this rise in prescription abuse to our overly pressurized, go-go-go society that leaves adults overworked and overstressed and thus vulnerable to the soothing relief of prescription pill abuse. So while some adults, like Roger, stumble into addiction not realizing that their post-surgical recovery can get them into addiction trouble, others discover that a Xanax can take the edge off of a pressure-packed day more discreetly than a two-martini lunch.

That, coupled with an over-eager pharmaceutical industry — what I like to call the “pharmaceutical industrial complex” — have created the perfect storm of self-medicating adults. And once addicted, many adults like Roger feel trapped in a closet of shame; they then have to keep using more and more of their pills (as increasing tolerance means users have to consume more to maintain the same effect) lest they go into withdrawal and their addiction secret is “discovered.” That’s when husbands like Roger — as well as wives and boyfriends and girlfriends — start hiding their pill-abusing behavior as they stay trapped in the cycle of addiction.

Help your husband get help

But the best thing that a closet pill abuser can do is to come out of the closet of denial and seek help; treatment is the only thing that can stop the painful cycle. And a loved one can be the best support in that difficult process.

2 hrs ago
by Holly Pevzner