When we get a headache or stomachache, have insomnia or aches and pains, we often reach for quick relief in the medicine cabinet. We’re used to masking our symptoms with over-the-counter (OTC) medications, but don’t usually ask ourselves what’s causing the problem, and will OTC drugs take care of that? 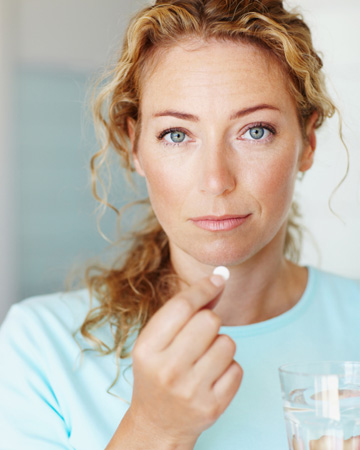 Even worse, many common OTC drugs can make us feel sicker. Here are five OTC drugs you may use regularly without a second thought — and what you may not know about their harmful effects on your health.

Aspirin and ibuprofen (Advil and Motrin are two examples of the latter) are a class of drugs known as NSAIDs. Because they effectively block pain and reduce inflammation, doctors have long recommended them to relieve the joint pain and inflammation of osteoarthritis. Unfortunately, these seemingly benign painkillers cause 15,000 deaths in the US annually, and more than 100,000 Americans are hospitalized because of their side effects. Over the last 20 years, more than 300,000 deaths have been caused by aspirin and other NSAIDs. Unfortunately for arthritis sufferers, NSAIDs wreak havoc on the gastrointestinal system, causing ulcers and stomach upset. Even worse perhaps, they have been proven to accelerate osteoarthritis and joint destruction by inhibiting cartilage repair.

Tylenol is acetaminophen, and it’s the most widely used pharmaceutical painkiller and fever reducer in the US. Unfortunately, it is also one of the most common pharmaceuticals associated with both intentional and unintentional poisoning and toxicity. Acetaminophen overdose is the leading cause of acute liver failure and causes 10 percent of all cases of kidney failure in the US.

Sales of OTC acid-blocking medications in the US exceed $13 billion annually. These household names, such as Axid AR, Pepcid AC, Zantac, and Prevacid, are designed to relieve the pain and discomfort of acid reflux and heartburn. It’s not easy for people to stop once they start, because they get dependent on these drugs, which interfere with and eventually disable the body’s own natural digestive processes. There are serious consequences of taking either the acid-blocking or proton pump inhibitor versions of these drugs. Both classes of drugs produce significant disturbances in the gastrointestinal tract, which protects the body from infections that lead to pneumonia, peptic ulcer disease and malnutrition.

Common antacids such as Pepto-Bismol, Milk of Magnesia, Rolaids, Tums, and Alka-Seltzer are safe if taken occasionally. On the other hand, Maalox, Rolaids, Digel, Mylanta and Riopan all contain aluminum, which may play a role in Alzheimer’s disease, Parkinson’s disease, and Lou Gehrig’s disease. Overuse or regular use of any of these drugs can lead to bowel irregularities, kidney stones, and malabsorption of nutrients.

Common OTC sleep aids, such as Benadryl, Unisom and Nytol, can be effective for occasional insomnia. However, these drugs contain antihistamines, which interfere with normal sleep patterns and actually disrupt healthy sleep cycles — the “repair” mechanisms that help us feel rested, happy and ready to face the day. As a result of this brain function interference, you’re left groggy and “hung over” the next day. Also, OTC sleep aids lose their effectiveness over time, because your body quickly develops a resistance to antihistamines.

All OTC children’s cough and cold medications — cough suppressants, cough expectorants, decongestants and antihistamines — now contain a warning on the label not to give to children under 4 years old. That’s because the FDA found them to have serious side effects, including death. So do you really want your 5-year-old, or even your 10-year-old, to take these drugs? All the scientific evidence shows that these symptom reducers don’t help colds and flu, which go away on their own in five to 10 days. Why risk convulsions, heart problems, trouble with breathing and neurological complications that are associated with OTC children’s cold and flu medicines?

Before you got to your corner drugstore and buy a medication that merely relieves the symptoms of your ailment, find out about its side effects and search for alternative, natural therapies that actually address the cause of your discomfort. For most common conditions, there are safe alternatives to over-the-counter medications that actually cure the underlying condition. You can get symptom relief without the dangerous side effects.

Starting a new medication? Questions to ask
Alternatives to medications for anxiety
Should you take Xanax?

21 hrs ago
by Lindsey Lanquist