Turns out that yoga does more than enhance flexibility, posture and balance. The meditation aspect also helps keep you calm while sitting in a makeup chair for 15 hours straight. That’s what McKenzie Westmore, host of SyFy’s Face Off, found out while gearing up for the show’s third season. 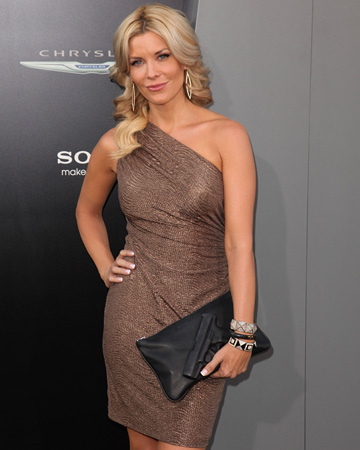 As the host of the special effects and make-up competition reality show, McKenzie sat through three back-to-back make-up transformations, recorded in time-lapse fashion, that did not allow her to move. At all. “Meditation got me through that for 15 hours straight, with only two 10-minute breaks,” Westmore says. “I had to zone out and go to that happy place in my head.”

In addition to her Zen-like approach to makeup, Westmore is also known for her 10-year run as Sheridan Crane on NBC’s daytime drama Passions, among many other shows and films. As if that weren’t enough, she is also a certified personal trainer.

She told SheKnows her tips for staying in shape and eating nutritiously.

SheKnows: What inspired you to become a certified personal trainer?

McKenzie Westmore: I’ve always had a love for how the body can function at its optimum best through nutrition. During Passions, I got a lot of mail from mothers and girls asking me how to stay in shape. So I started a message blog. But I became concerned [about the information I was giving out] and wanted to be legitimate. So I went to school on the weekends and became certified as a personal trainer — kickboxing, yoga, personal training aerobics as well as nutrition. I have been certified for 10 years now.

SheKnows: How do you make time to exercise?

McKenzie Westmore: When I’m on Face Off I’m there six days a week. My schedule has been a little hectic, especially this last month, so I find time to do small exercises here and there, even [for just] 10 minutes.

SheKnows: How do you eat healthy with such a hectic schedule?

McKenzie Westmore: At the very least I make sure my nutrition is at an optimum level so I’m functioning well and get through my day without having to rely on too much coffee or sugar. I drink lots of green tea, lemon water, lots of good fats and oils and good carbs.

SheKnows: Do you plan your meals?

McKenzie Westmore: I never really plan out my day of eating, but I’ll have a basic idea of what is nearby or on set that is a good choice. I also balance it out, too. I’ll pick one if it’s a choice of rice, bread or pasta. I think it’s fine to have bread with a little butter. To me, when you cut everything out so drastically you rebound. You end up eating everything in sight. It defeats the purpose. So I look at the options and may choose a piece of fish and rice, and salad with a little bit of real dressing.

SheKnows: Can you give us a sneak peek at what we can expect in this season of Face Off?

McKenzie Westmore: This season opens with Star Wars. The artists will recreate the cantina scene. We also have an episode with 7-year-olds who design monsters and instruct the artists on how they want their monster to look. We end with an amazing finale where the artists have to make up stunt people, and on Halloween night America gets to choose the winner of season three, which is something we’ve never done before.

SheKnows: Thank you, McKenzie. It sounds like an action-packed season to come!

Dancing with the Stars host Brooke Burke gives healthy tips for moms and their families.