Khloe Kardashian has faced criticism from the press about her weight. But the youngest Kardashian sister says she’s comfortable in her own skin, and she’s sharing her diet and fitness secrets with SheKnows. 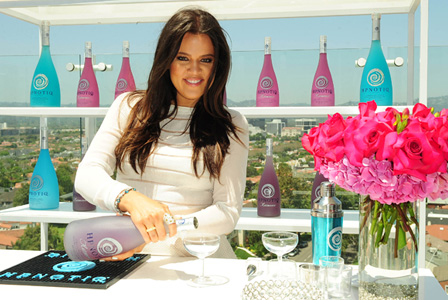 On a bright and breezy afternoon in Beverly Hills, we met up with reality star Khloe Kardashian on the rooftop of Mr. C hotel to test out her new cocktail recipe.

“It’s called The Dash,” Khloe told us of her champagne and Hpnotiq Harmonie concoction. Khloe said she likes the cocktail because it’s light and not too sugary, important factors for health-conscious celebs who are constantly in the spotlight.

“I don’t deprive myself if I want a glass of champagne,” Khloe told SheKnows. “You have to enjoy being at a gathering. But I try to limit myself.”

Khloe said she also makes sure to eat a healthy snack ahead of time so that she doesn’t overindulge on passed appetizers at events.

“Before I go to events like this, I try to eat something healthy,” said Khloe. “I always have snacks in my cars like almonds and dried fruits. I always have things handy or else you’re going to be binging on things you shouldn’t be, and feel guilty afterwards.”

The youngest Kardashian also stays fit by working out with her personal trainer, Gunnar Peterson.

“I do circuit training, five days a week,” she told us. “And Pilates is good when you can’t go to your trainer. You just feel lean and long.” 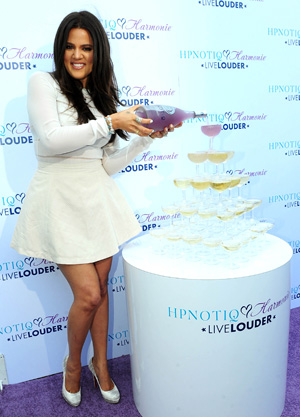 Working out with the Kardashians

Khloe also works out with her sisters Kim and Kourtney on occasion, as seen on Keeping up with the Kardashians. But Khloe tells us, she’s definitely the most athletically inclined in the family.

“I think I’m the most athletic,” Khloe told SheKnows. “Kourtney never works out and it’s really annoying because she has such a good body. She does yoga like every blue moon. And Kim works out, but she goes in spurts. They have these amazing bodies and eat Oreos all day.”

Her sisters aren’t the only ones with sweet tooths though — Khloe’s hubby Lamar Odom is also known for his sugary eating habits. Luckily for her though, Lamar is currently on a strict diet from his Los Angeles Clipper’s nutritionist.

“They have him on a meal plan, so they send him home with breakfast, lunch, and dinner,” she told us. “I’m like, ‘Thank God.’ He loves really heavy, hearty food. I cannot make mac and cheese and chicken, because of course you get tempted.”

The most important factor in Khloe’s health routine, though, is staying positive about her body image.

“I’m not going to do anything drastic to fits anyone’s mold,” she told SheKnows. “You have to be confident in yourself, whatever size that is.”