Walkers nationwide are joining forces in an effort to save the lives of cancer victims. Find out how just a few of your steps can help make huge strides toward making a difference. 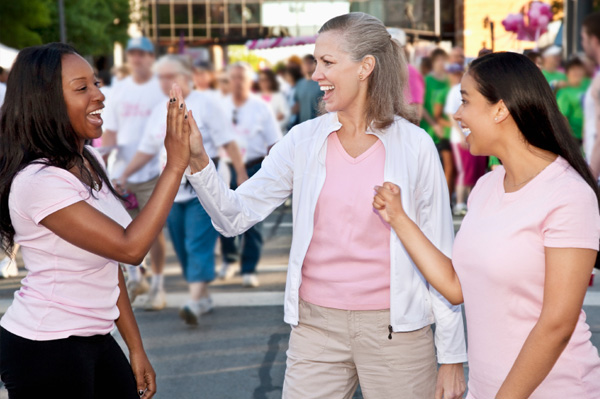 The American Cancer Society’s Making Strides Against Breast Cancer walk is a nationwide walking event that unites and connects communities on a variety of levels to raise money to help end the fight for breast cancer. More than 270 walks are held nationwide each year to raise money for cancer research, increase awareness for individuals, inspire communities to get involved, and most importantly, support past and present victims. Each walk ranges from 3 to 5 miles, allowing any and all to participate whether it be through donations of steps or dollars. A Making Strides event provides passion, power and purpose. Passion is used as the drive to get us walking — for those who we have never met, those who we can’t get back, and those who we wish will never experience the same pain. Power is what we all have inside of us to fight for those who need us, and for those who will need us; and purpose is the one thing we have in common, with more than one million supporters across the country, all fighting for the same thing: beating the disease.

Why it was founded/how it got started

In 1984, cancer survivor Margery Gould Rath spoke up about being the change she wished to see in the world. With the goal in mind of bringing together cancer survivors while raising money for the American Cancer Society, a “move-a-long-a-thon” was created and given the name Making Strides. The event began small, with 200 participants in the city of Boston, but by 1993 the small event grew to 4,000 participants and evolved into cities throughout New England. Since becoming known as the American Cancer Society Making Strides Against Breast Cancer, Margery’s vision has developed into a nationally known and supported charity and event, supporting survivors, victims and the victim’s families. The progress this charity has made is nothing short of remarkable thanks to the efforts and dreams of Margery and her supporters. But the success of the event and research funding lies in your hands. Each stride made is another dollar in the hands of the American Cancer Society, used for the next breakthrough for breast cancer.

Making Strides Against Breast Cancer began 20 years ago, and through their endeavors and efforts of charity and education, they can be proud of being a part of a 32 percent decline in deaths caused by breast cancer. Since 1993 an astounding $460 million was raised for the fight for breast cancer, and in 2011 alone more than 1 million walkers raised $60 million. Each walk and event that is put on not only raises money for cancer research, but teaches communities and makes individuals more aware of what we can do to reduce our risks of falling victim to the vicious disease. Donations make a difference. Everything and anything helps, from endless research to assisting people to get well and stay well. The American Cancer Society has created programs, guidelines and even newsletters we can subscribe to, all in hopes of educating communities of the responsibilities we must commit to for our well being. One article, one interaction or one lump can change the rest of our lives.