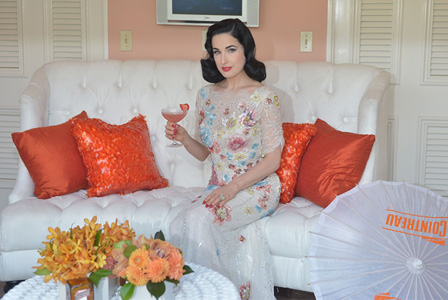 Dita Von Teese entranced a crowd of Hollywood royalty recently as she performed a seductive burlesque routine at the Beverly Hills Hotel’s 100th anniversary party and the kickoff of Cointreau’s Poolside Soirees.

So what’s the secret to her alluring ways? Dita’s sharing her top tips with us.

SheKnows: What’s the easiest way to turn on your man? 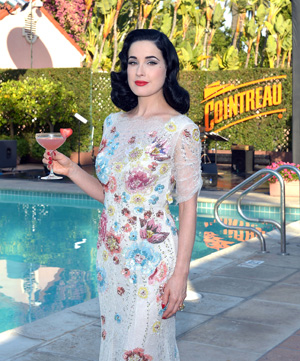 Dita: I have my own, Von Follies. It’s not yet available in the U.S. It’s my favorite because I get to design things I want in my own wardrobe.

SheKnows: Where do you get inspiration for your designs?

Dita: A lot of it is inspired by vintage lingerie. I love black lace. My first collection had a lot of black lace layered over colors like turquoise and red.

SheKnows: What’s the best way to keep your man thinking about you all day?

Dita: The best way is to leave him alone. You have to be mysterious, a little bit hard to get. It’s a game and they like to hunt. You can’t be too pushy.

SheKnows: Is that all?

SheKnows: Some say it’s with food — what do you think is the way to a man’s heart?

Dita: Humor. Laughter is a great way. A man needs to see that you’re not just a pretty face and that you’re fun and have chemistry outside of the bedroom.

SheKnows: What is your favorite date night activity?

Dita: It depends on where we are in the relationship, but for certain men, I might like to entertain in my house and cook. But you have to earn that spot. Generally, I like to go out to dinner and go for a nice walk in Paris or something.

How to take a safe, sexy pic for your man
12 Ways to sex up your relationship
How to feel comfortable with acting out bedroom fantasies

6 hrs ago
by Cheryl S. Grant