We all have that one friend who can eat whatever she wants and never seems to gain a pound. You gnaw away on a celery stick as you watch her wolf down the latest fat-laden burger — extra mayo, thank you. “How do you do it?” you ask, hoping to gain access to this Holy Grail of skinny secrets, to which your friend responds with a shrug, “I don’t know. I must have a fast metabolism” (a response which clearly justifies not telling her she has a giant catsup smear on her right cheek). Obviously, there’s some mysterious force at work here. Or is there? 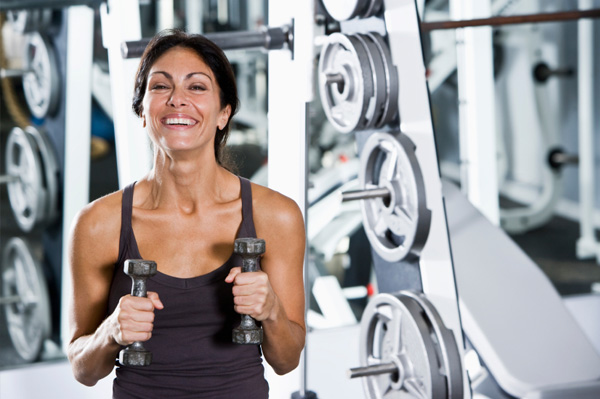 Far from mysterious, human metabolism refers to the sum total of our body’s energy-producing and burning reactions. Total daily energy output describes how much energy you use during a 24-hour period, including your activities throughout the day.

This activity level, which includes both structured exercise and unstructured activities such as shivering or fidgeting (like your twitchy, catsup-faced friend) is the most variable of the three and the one aspect you can control and change. Here’s how.

Muscle contributes approximately 20 percent to your total energy expenditure and fat contributes approximately five percent. Increasing muscle mass through exercise, even slightly, boosts your metabolism. According to research, an increase of 4.5 pounds of muscle mass (the average amount an exerciser adds) increases resting metabolic rate by about 50 calories a day. Although it may not sound like much, it adds up over time the same way an excess of the same number of calories adds up to inches around your waist. Lift three times a week for best results.

Run for your life

Regular cardiovascular exercise helps keep your metabolism up throughout the day. Exercise elevates metabolism – not only during the exercise session but for hours afterwards. Aim for a minimum of 20 to 30 minutes, three to five times a week.

Consuming too few calories in an effort to lose weight quickly defeats the purpose. Starvation diets trigger the body to suppress its metabolic rate by as much as 20 percent. A better, more effective tactic calls for making smaller, more gradual changes instead of implementing an all-or-nothing approach.

Eat five smaller meals frequently throughout the day to keep metabolism up. The key is “smaller” meals: breakfast, a mid-morning healthy mini meal, lunch, a mid-afternoon mini meal and dinner. Just be sure to divvy up calories to fit within your goal (not less than 1,200 a day).

Getting only four to five hours sleep instead of the recommended eight can lead to increased appetite and weight gain, according to numerous studies.

In general, metabolism-boosting supplements are minimally effective at best and dangerous at worst — and regardless, should be avoided. You may never be as thin as your friend, but try these tips and you could well be able to turn the tables on her in time.