Celebrating the Fourth of July is fab, from sampling grilled hot dogs to biting into a slice of fresh watermelon to downing a cool cocktail (or three). 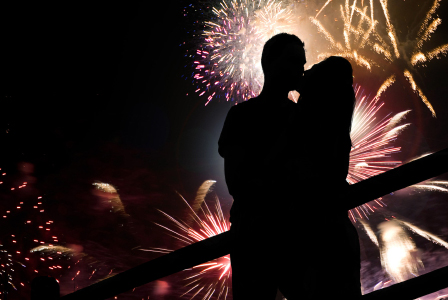 But after all the pre-show buildup, sometimes the fireworks themselves can seem a little dull. We’ll help you remedy that with a special Fourth of July fireworks kissing game. Who needs what’s in the sky when you’ve got your arms wrapped around the real prize?

Since we’re dealing in explosive materials (hey, a kiss can be deadly if you mean it!), we needed to call in an expert to make heads or tails of this TNT business. We hit up fireworks expert Mike Tockstein, of Pyrotechnic Innovations, who educated us on what to expect from this year’s Fourth fireworks displays… and what we should watch for in between locking lips!

An average large-scale Fourth of July fireworks show lasts about 15 to 20 minutes, Tockstein says. So start puckering up!

For every red, white or blue firework, give each other… A LITTLE ARM SQUEEZE.

The U-S-of-A’s colors will be the most common hues during a Fourth display, Tockstein says.

For every jewel-toned firework (purple or teal, for example), give each other… A FULL-ON HUG.

These shades are rare compared to basic blue, green and red. “Fireworks can be made to produce almost every color in the visible spectrum,” Tockstein says. “Colors that do show up, just not as frequently, would be your off colors like aqua or magenta.”

For every firework accompanied by a “whistle” sound effect, give each other… A PECK ON THE CHEEK.

That cool “shooooo-oooo!” sound is something called an “audible” effect, Tockstein says. “It’s basically a small firework put inside of the larger shell. Think of it as an effect within an effect.”

For every firework that explodes into a shape, give each other… A PECK ON THE LIPS.

Ooooh, you know the ones: Fireworks in the pattern of hearts, smiley faces, cubes, etc. (Tockstein calls them “specialty shells” with “intricate effects”). These types aren’t used as often because they’re pricey, which is why we’re upgrading you and your viewing partner to a kiss here. “Anything that does not have a simple spherical break pattern is going to be more complex to build and ultimately more expensive,” says Tockstein.

For every gold-glitter firework, give each other… A FULL-ON KISS.

Makeout time! Hot! Why are the sparkly fireworks so special? ‘Cause they cost beaucoup bucks! In fact, there’s no guarantee you’ll see one in any given show. “Golden brocade shells are typically more expensive and not used as frequently, but probably one of the most beautiful effects you will see from an aerial firework,” Tockstein says. “They burst with bright glittering gold stars that hang in the sky for an extended amount of time. When used, you will often see many of them back to back, temporarily filling the entire sky with gold.”

But, kissing and fireworks enthusiasts beware, Tockstein warns: If you want to build some serious suspense, he recommends saving the smooching for after the show: “The only happy face pattern shell of the entire show might go off while you are kissing and you could miss it!” he says. “If you’re with a loved one, save the kiss until right after the finale, as you will already be in sensory overload when hundreds of fireworks go off at once, which should make the kiss emotionally overwhelming!”

If you want to watch a live feed of Tockstein’s crew in action as they load fireworks for a big show in Irvine, California this Fourth, bookmark this link! The images beamed from his three cameras will refresh every 20 seconds.

For more Fourth of July tips

19 hrs ago
by Elizabeth Yuko

20 hrs ago
by Gina Escandon