How you flirt says a lot about who you are and the type of relationship you’re looking for — a one night hook-up, friend with benefits, partner in crime or long-term love. 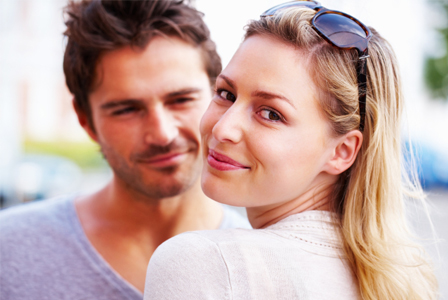 Some methods work better than others and each has its pros and cons. We explore some of the most common flirting styles and delve into how each one works.

Being bold and brash isn’t for the faint of heart but more for those who know what they want and how to get it. More specifically, if you’re looking for something more short-term, this is the flirting technique for you. We should stress though, that this is not the best way to let someone know you’re interested in commitment rather than just frivolous fun. But if you’re feeling frisky, lay on the physical flirting.

Bold, physical flirting means acting in a way that makes your intentions obvious. Touch his arms, chest and shoulders as you talk and lean in close whenever he says something interesting. He’ll be sure to get the message.

This form of flirting is less obvious but still manages to get the point across in a way that works for women who aren’t comfortable being too forward. We suggest being playful and teasing by whispering something in your target’s ear such as, “I bet I can beat you at a game of darts. Let’s play.” Then, take him by the hand and lead him right to the dartboard. This approach is fun and fresh and immediately gives you the opportunity to chat and check out the chemistry you have. It also shows the person you’re flirting with that you’re friendly, social, forward and a little competitive — but in a non-threatening way. Doing something active (be it darts or a game of pool) also makes it easier to get to know someone since the activity removes some of the conversational pressure.

Of all the flirting styles, sorry to say, this one ranks the lowest. Flirting is about giving and getting positive energy, and if you’re too shy and quiet, you can’t be an active, engaging participant in that exchange. Not to mention, you won’t get noticed. The risk is being bypassed by someone you think you’d like to get to know or coming across as aloof — neither of which will net positive results.

Even if you’re naturally shy, work at mustering up some confidence and choosing subtle flirting techniques that still work, like adding a flirtatious, coy glance to the side as you’re speaking.

Forget the cheesy pick-up lines and opt for honest, upfront flirting. The direct approach is the simplest and most clear. To make it work, start by choosing some kind of outside topic, person or object to talk about instead of the typical small talk stuff (the weather, what he does for a living). These types of questions tend to bore people and make it hard to really get to know someone. Instead, bring up the new art exhibit in town, ask him what his opinion is of the band that just got offstage or find out what he’s reading or where he’s traveled. Out of all the styles, being direct takes the cake. It’s fresh, honest and engaging, which also makes it sexy and smart.