Sure, it’s tempting to engage your significant other in a shouting match any time you or your personal space feel threatened. I mean, the least he can do is wipe the toothpaste off the sink, right? But is sweating the small stuff smart? 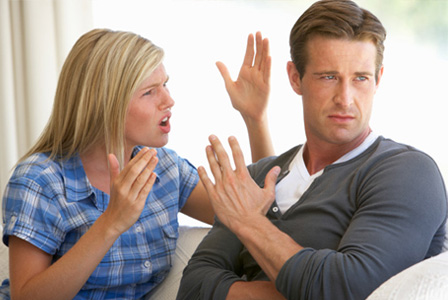 Here are five idiotic things that couples have been known to fight over but really aren’t worth rowing about in the long run. Take note so you can recognize when you need to take a deep breath… instead of blowing a gasket.

Wow, is he really leaving his boxers/PJs/jeans on the floor again? Don’t fume. Kick his dirty socks under the bed (hey, you’re not his maid), and try to forget about it — he likely didn’t mean any disrespect. In a relationship, one person is always going to be the Oscar to the other person’s Felix, so you might as well laugh about it.

Here’s how to deal: Get one of those cool hampers with partitions that divide clothes by colors (relatively foolproof), and show him how it works. Then cross your fingers.

Trying to navigate a route together can seem harrowing at the time, but resist the urge to lash out. You’ll eventually get there, wherever “there” is, as long as you obey the traffic laws.

Here’s how to deal: Roll down the windows for some air and try being silent. Not crying, not hyperventilating… just breathing. Your calm countenance will inevitably influence his mood.

Unless his or your old flames are actively trying to contact you or woo one of you back, obsessing over beaus/girlfriends past isn’t worth your breath. Avoid bringing them up, and you’ll avoid pointless fights. After all, there’s nothing he can do about his past — and neither can you.

Here’s how to deal: Repeat this to yourself: He chose you. And thank the good Lord you aren’t still with one of your exes — bullet dodged, yes?

Like Kevin Spacey said in American Beauty, things like couch cushions and wallpaper samples seem important, but “This isn’t life! This is just stuff!” If your hubby is hell-bent on recovering the pool table in bright red felt or keeping his beloved moose head in your den, let him. At the end of the day, you can decorate around the offending item — an “urban woodsman” theme might actually be cool — or ignore it, but picking your battles means you’ll both end up happy in one way or another.

Here’s how to deal: For every object he picks, you get to choose something of a similar size — an armchair for a writing desk or a wall of paint for a carpet. You’ll be making the decisions together, but you’ll each get to put your own touches on the place.

Fighting with your guy over the remote control is an old cliché, sure, but there are only so many episodes of Full Metal Jousting you can take. Take a time out and focus on how it feels to spend time together rather than focusing on the screen. That’ll bring you back to what’s truly important.

Here’s how to deal: Invest in a DVR, and grin and bear it. If you’re not an action movie fan, for example, try focusing on the hot (probably shirtless) young actors. Then introduce him to critically acclaimed TV shows that have a little something for everyone, like Mad Men, Breaking Bad, The Wire or Game of Thrones — all great for hunkering down and having a snuggle-tastic DVD marathon.

Learn how to translate his love language
Lost that loving feeling? How to get it back!

Coronavirus Damages Placenta in Pregnant Women, According to a New Study