There are several cliches associated with being a single person: the lovelorn-but-witty Bridget Jones character; the indiscriminate swingin’ single person with wanton sexual appetites; the old maid/crazy cat lady convention; and the wine-drinking, reality-TV-show-watching trope that we’d defend ourselves against, but drinking wine and watching reality TV while sitting on your couch is pretty awesome. In that spirit, here are 10 cliched things single people have been known to say… sometimes for good reason. 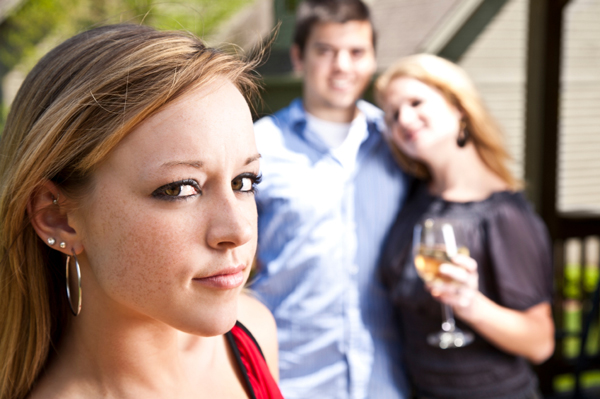 Hey, sonogram-posting parents: We’re real happy for you and all, and we’re gonna let you finish, but keeping sonogram photographs to yourself was the classiest move of all time. OF ALL TIME!

Here’s an easy way to passive-aggressively retaliate: For every sonogram photo you see on Facebook, post one of yourself doing something awesome, like hiking or clutching a fancy martini, neither of which those new parents will be able to do for a really, really long time.

When your date shows up reeking of Febreze and clove cigarettes and you spend roughly seven-eighths of the evening talking about the weather and how Friends really was darn fine 1990s primetime programming, it’s normal to come home, crack open your emergency mini airplane bottle of Crown Royal and vow never again to emerge from your bedroom.

But here’s the thing: You will. We feel you, friend, but eventually a guy will ring your doorbell who has not only ironed his shirt but has also bathed and will totally understand your obsession with Tumblr and Battlestar Galactica. We promise.

“All guys are jerks”/”
All girls are crazy.”

No, not all men are numbskulls, and not all women are insane, despite the fact that your ex hacked into your email account and tried to use the information contained within to get you fired. Well, you win some, you lose some — some guys are idiots, and some aren’t, and in this craaaaazy game we call dating, it’s up to us to try and discern the difference. If he shows his true colors of unrivaled arrogance and sociopathy later rather than sooner, don’t beat yourself up. He’ll have to live with himself for the rest of his life, whereas you only had to for a few weeks.

“What am I doing tonight? Oh, just going to check out this trendy new bar/band/art show.”

Sounds righteous! Hmm, funny: Your shut-in coupled friends can’t come with you because they’re boring and tied down. Too bad for them!

“Online dating is the worst.”

Well, shark and/or bear attacks and/or historical atrocities are the worst, but, yes, online dating can be unpleasant at times. One trick is to gauge your own “gameness” for the hunt: Are you burned out both at work and emotionally? It might not be the best week to schedule five coffee dates with five different dudes. Are you short on time? Make a date come to your neighborhood for a glass of wine rather than hauling your frazzled carcass all the way downtown. Tailor the pursuit to what you’re up for. And if that means taking a break from the site for a few days (or weeks, or months), that’s more than fine.

“Why are all the good men/women taken?”

It sure seems that way sometimes. But even if everyone around you seems coupled, it’s only a matter of time before a new cowboy saunters into town and rocks your world, just like in a really juicy Danielle Steel novel, but hopefully with better dialogue. Every day, people break up with their significant others, move to a new town, get divorced or finally decide to start dating again. You’ll catch a vibe like that from a great person when you’re ready.

“Should I call/sleep with/get back together with my ex?”

Ah, the lure of the familiar. Most of the time, the answer to this question is no. If you broke up with him because he was a manchild, it’s highly unlikely that he’ll be all grown up now in the space of a month. Instead, try making eyes at the cute hipster guy at the end of the bar during your next girls’ night, even if his thick, black-framed glasses are kinda over-the-top. Hey, conversation starter!

“I’m going to focus on

Good! Being totally selfish is the one best perk of being single. Enjoy it! Buy one of those giant 5-pound Hershey bars just for you, rent every Ryan Gosling movie ever made and put your feet up on a circular cushiony ottoman. In other words, treat yo’self.

Are all children under seven out of the room? Good. Pssst… Much like Santa Claus, “The One” doesn’t exist. The person we end up with (or the succession of people we partner with throughout our lives) are a direct product of our personal choices and how hard we want to work at a partnership.

In the past, maybe you sabotaged things, or he did, or maybe you just weren’t at a place in your lives where you wanted to go for the long haul. Whatever you do now, remember that you can get the kind of relationship you want — you just might have to work hard at it. You know, by compromising, putting others first, that kind of thing. Oh, and choosing a person whose life goals mirror your own. Mr. Right isn’t going to fall from the sky and into your lap, but if you meet a guy who’s willing to take on everyday challenges side by side with you, well, then you’ve found yourself a winner.

Mastering the art of rejection
Dating advice from mom: How to take her tough love
How to deal when you’re waiting by the phone

23 hrs ago
by Meredith Goldberg