Dancing with the Stars is one of the most popular shows on TV and we were lucky enough to get the chance to speak to one of the amazing dancers on the show, Kym Johnson, last week. She spilled about the show, her love for dancing and her new cardio dance DVD with Mark Ballas. 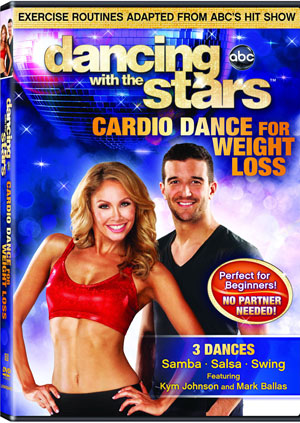 When you’re tuned into Dancing with the Stars, it’s hard to look away from three-time champion Kym Johnson as she dances. She’s graceful, determined, incredibly fit and passionate about what she does. Known as the calm and cool-headed dance instructor, this beautiful Australian dancer is just as sweet in person as she is on the show. Plus, with the release of her new workout DVD with fellow instructor Mark Ballas, Cardio Dance for Weight Loss, she’s giving regular Joe Schmos like us the chance to have a body like hers.

Each week, she trains a celebrity on a new dance routine. So when it came to picking just three dances to feature on the weight loss DVD, we were dying to know why she chose the ones she did — salsa, swing and samba.

“These are really fun dances that work the whole body, from your abs to your thighs to your glutes. These are the dances people respond to well on the show and are the ones everyone wants to learn how to do,” she says.

Some stars, like Kirstie Alley, have lost a ton of weight just by doing the show and dancing. So how similar are the dances on the tape to the ones on the show and why is this such a great workout?

“The dances on the DVD are very similar to the ones on the show. We wanted to give you a great cardio workout as well as try our best to mimic the dances we do on the show. Dancing is a great workout because it gives you a different way to exercise and works every muscle group. It’s a great DVD to do and you will end up seeing a difference in your body. I know I did when I was choreographing it.”

We’re in season 14 of the show, so why was there a push to make a DVD now and not before? Are there talks of doing another set of DVDs with new moves or a more advanced version?

“It was definitely the executives’ idea, once they saw just how well-received the show was and we just went with it,” she says. “I’m very sure they’ll come out with something else. It’s definitely something I’m sure we’ll do.”

Johnson, who is from Australia, started dancing at the age of 3 and began ballroom dancing when she was just 13. When did she realize dancing was what she wanted to do the rest of her life?

“I realized it when I was 13 and started ballroom dancing. That’s when I really fell in love with the art of dancing. It’s one of the most rewarding things you can do — taking someone who has no idea about dancing and seeing the transformation in them feels really good.”

Since she’s been dancing most of her life, she must have discovered some things she doesn’t like about dancing for a living, right?

“It can taxing on your body sometimes, which is pretty difficult at times; and not having a day off in three months. But then you get a few months off so it works out.”

With the show such a big hit, in the states and abroad, we wanted to know why she thinks it’s gotten such rave reviews.

“I think people like to see their favorite celebrities doing something really outside of their comfort zone,” she observes. “It’s really relatable to see these celebs take on something they aren’t very comfortable doing and something they have not done before. People can relate and think, ‘Oh, I can do that too!'”

Speaking of celebrities, we had to ask: Who has been her favorite dance partner?

“I have to say I’ve loved working with the athletes — it’s a little easier with them since they are so agile and they understand the dedication and the hard work. I’ll have to say Hines Ward, the football player, was one of my favorites; he was incredible. I’ve been really lucky with all of my celebrities thus far and they’ve all done really well.”

Dealing with some people with a high celebrity status (and ego) can’t be easy. So how does she keep her cool and patience?

“I think I’m a very patient person in general,” Johnson says. “And you have to understand that these celebrities are completely out of their comfort zone and they don’t know what they are doing. they are learning, so you have to be patient and figure out the best way to work with them.”

As a professional dancer who not only has to teach novice celebrities how to dance but also dance with them, what’s it like dancing with a partner? Is it easier or harder than doing it by yourself?

“With a partner, it’s sometimes a little bit difficult. But when you’re alone, it’s all you, so you can’t really blame anyone else if you mess up. I think it’s so great when you’re able to dance with someone and I think it’s definitely a little more fun than dancing alone.”

Be sure to check out this season of Dancing with the Stars, where Kym dances with Jaleel White, who you may know as Steve Urkel from Family Matters. You can tune in on ABC live on Mondays at 7 p.m.

Watch an exclusive clip from the amazing workout DVD.