Estrogen deficiency is associated with increases in heart disease, Alzheimer’s disease, osteoporosis and many other medical conditions that markedly affect both the quality and quantity of a woman’s life. Why do women deny themselves the benefits of hormones? Dr. Marina Johnson, medical director at the Institute of Endocrinology and Preventive Medicine in Dallas, says it is fear and misinformation. Her book, Outliving Your Ovaries: An Endocrinologist Reviews the Risks and Rewards of Treating Menopause With Hormone Replacement Therapy, is a guidebook to HRT. Here is our Q&A with Dr. Johnson. 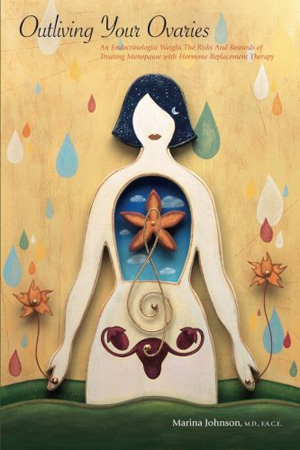 SheKnows: What was the inspiration for your book?

Marina Johnson: I started treating postmenopausal women early in my career because no one was addressing their complaints. Women were often patted on the head and told “Honey, that’s just what happens when you get old!” They were essentially told, “Go home and live with it.” Even now, instead of being offered estrogen, women are more often given antidepressants. I’ve devoted my medical career of 29 years to treating menopausal women and I’ve seen the transformation that occurs when women are made whole again. Writing Outliving Your Ovaries is my way of giving back. By sharing this knowledge I’ve acquired with other women and their physicians, I can help many more women to improve their lives.

SheKnows: Is there too much confusing information surrounding HRT therapy?

Marina Johnson: In 2002, the Women’s Health Initiative (WHI) reported increased incidence of breast cancer in women who used Prempro and increased heart attacks, strokes and blood clots in women who used Premarin or Prempro. Overnight, women everywhere were taken off all forms of HRT. Here’s why you can’t apply WHI findings to all HRT and to all women who take HRT: Most women who start HRT are newly menopausal and taking HRT for symptom relief. They have a low incidence of heart disease at the start of menopause. Subsequent analysis showed the WHI design was flawed because the majority of women in WHI had been menopausal and on no HRT for 20 years, so they likely already had significant heart disease. Also, 50 percent of WHI women were smokers and 34 percent were obese; both are known risk factors of heart disease and cancer. When you broke down the heart disease to younger women who started HRT within 10 years of menopause, there was no increased risk of heart disease. The increase in breast cancer was found to be from taking a synthetic progestin daily.

Marina Johnson: The important finding in the WHI report was that both Premarin and Provera in all age groups increased blood clots and strokes. Blood clots and other harmful products are made by the liver when you give oral estrogen. This effect doesn’t occur when you give estrogen topically in the form of patches, creams or gels … So when you’re choosing HRT, don’t use estrogen pills because it’s safer to use topical estrogen. For the progestin, avoid giving it daily and go for natural progesterone instead of a synthetic progestin.

SheKnows: Are there more natural methods to treating menopause that you recommend?

Marina Johnson: Herbal therapies like black cohosh and red clover have traditionally been used to treat menopausal symptoms. They can sometimes relieve menopausal symptoms. However, it’s important for women to know that they are not a substitute for estrogen. Even without symptoms, when the body is deprived of estrogen, various tissues literally start falling apart. The organs most affected are heart, brain, bone, sexual organs and skin. Damage to these organs leads to serious problems like heart disease, strokes, Alzheimer’s, osteoporosis, painful sex and urinary incontinence. It also causes premature wrinkling of your skin that makes you look older than your age.

SheKnows: Do you feel that women can reduce symptoms associated with menopause and improve their lifestyle?

Marina Johnson: I often see women come in with a myriad of symptoms, sometimes as many as 20, that are all related to low estrogen. The women I see are often deeply troubled by their situation and desperate for answers and insights. The symptoms they are having are unsettling not only to them but to their families. What I find most enjoyable about my practice is seeing the transformation that occurs when a woman is made whole! It isn’t an overnight process but most women see an enormous improvement after the first three months of estrogen therapy.

More on HRT and menopause

12 hrs ago
by Dr. Lexx Brown-James