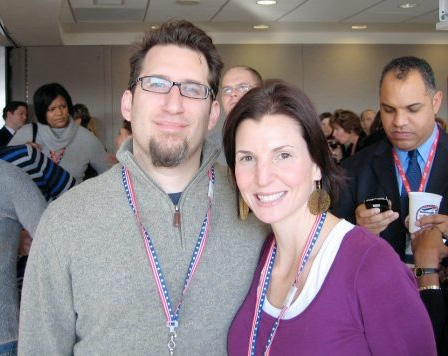 Sounds odd, right? In the meantime, we’re all along for the ride as we continue to explore just how social media is affecting our various relationships.

Can’t get enough love stories? Find out more about how social media has changed the love landscape.

Whether you’re a diehard social media addict or you couldn’t care less about Twitter, Facebook or all the other sites out there, you have to admit that these social media websites (and many like them) are making quite the impact on the way we go about our love lives.

Just think about it: Single ladies can scope out potential suitors online to see if they’re a good match (come on, we’ve all Facebook stalked a cute guy before!) and people in all corners of the universe can make love connections on social media sites.

And of course, long lost loves now have the chance to reconnect thanks to sites like Facebook. Case in point: Sarah Brysk and Michael Cohen. These lovestruck teenagers reconnected via Facebook 18 years later and turned a teenage summer fling into a love that lasts. We’re sharing their story today!

Sarah Brysk and Michael Cohen were smitten teenagers when they met at a winter seminar in 1990 for their national youth group camp. Sarah, a 16-year-old from California, had intended to go to her local camp branch, but got reassigned to Bucks County, Pennsylvania (where 19-year-old Michael lived) when her camp closed.

Sarah and Michael’s initial attraction turned into a relationship that summer when they both worked as counselors at the camp. Sadly, when the summer ended, they lost touch. Sarah went back home to California and Michael left for college.

After their summer fling at camp, Sarah and Michael had no contact. Their older brothers just happened to be friends (from camp) so Sarah would hear vague, intermittent updates about Michael, but barely anything.

After several years, Sarah got married in California and moved with her husband to New York City, where Michael was coincidentally living at the same time. While working at NYU, Sarah would get out every day at the subway stop that was across the street from Michael’s apartment. In fact, Sarah was living on the Upper West Side and Michael was dating someone that lived a few blocks away – so their paths almost crossed many times.

In the summer of 2008, Sarah got divorced and moved back to California. At the time, she had been on Facebook for a while, but decided to become more active and renew social connections as she tried to rebuild her life. While visiting a friend in Santa Fe, Sarah showed the Facebook novice how to navigate and join groups and was demonstrating by joining a camp alumni group.

As she did this, she saw Michael Cohen pop up and then sent him a friend request – showing her friend how it worked. Michael ignored her friend request at first. At the time, he had just come out with his first book and was covering primaries, campaigns, etc. and was trying to be coy. She saw him on Facebook chat a few weeks later and reached out again, at which point he accepted her friendship request.

Sarah and Michael engaged in an intense Facebook correspondence, doing most of their communication on Facebook chat and then transitioning over to the phone. Sarah had already planned a trip to New York City in September and when Michael suggested they meet, she told him she was already coming to see friends and family. They had their first date on Sept. 9, 2008 at The General Green in Brooklyn, and while Sarah had plans for the week she was in New York City, she ended up spending almost all of her time with Michael.

Their first date was amazing. Sarah remembers a very pivotal moment – when she emerged from the cab and saw him sitting at the bar looking great – and Michael vividly recalls that Sarah was wearing a fabulous dress. By end of week, the two couldn’t wait to see each other again, and within two weeks, Michael went to California to visit Sarah. After that, they went to see each other every few weeks, and Sarah moved back to New York City on Dec. 2, 2008. 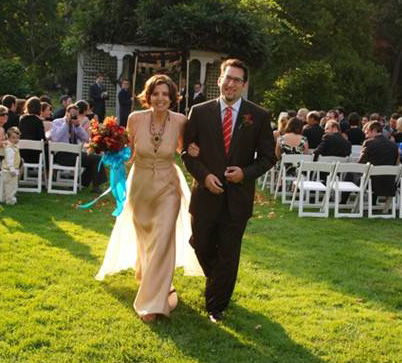 In February 2009, soon after Sarah moved to New York City, Michael came home late one night from a business trip and crawled into bed, waking her up and telling her he loved her and he wanted to get married. She was half-asleep and just sort of mumbled “sure,” but didn’t even remember the conversation the next day. They spoke about it again when they woke up and decided they were “engaged.” It was very informal – no ring or anything.

Sarah and Michael decided to get married at City Hall – with just family – on March 9, six months to the day from their first date. They had Sarah’s parents come in from California and surprised them with the wedding. Five to six days before the wedding, Michael called her at work to make plans to go to dinner that night, and set up a fake group dinner at The General Green (their first date location).

Since the weather was terrible, Sarah said she didn’t want to go, so the dinner ended up being just the two of them (as Michael had planned) and Michael kept talking about their relationship and future together. Sarah said she was clueless as to what was going on. After dinner they took the same walk they had taken on their first date and he brought her to the spot where they first kissed.

Then Michael said, “Oh wait, I want to show you something.” He pulled out his Blackberry to show his new status update: “Michael hopes that Sarah will say yes.”  He got down on one knee in middle of the snow with a ring, which he had spent a long time working to design with her best friend. Sarah was touched because she always wanted an engagement ring (she had only had a band with her first husband), but was shocked since she wasn’t expecting it and assumed they were already engaged. 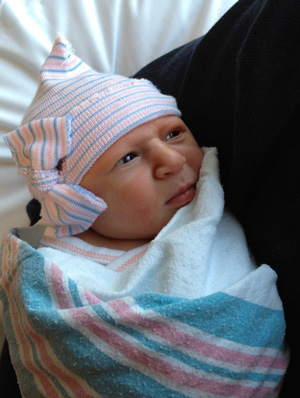 After their City Hall wedding, the couple announced it on Facebook, sharing that they’d celebrate with friends at a party later in the year. In October 2009, they had a full wedding and ceremony at an Inn in Bucks County near their camp.

Where are they now? Sarah and Michael are married and living in New York City. The couple welcomed a baby girl last month!

17 hrs ago
by Sara Dobie Bauer