After the honeymoon suitcases have been unpacked, the white dress stashed away and the last gift opened, the stress of planning and the pressure of throwing the perfect party seems light years away. And now, with no dress to squeeze into or photos to be taken, you both indulge a little the first few months. You go out to fancy dinners at the new French bistro, order in and eat dinner in your PJs from that Chinese place you both love and sip a bottle of leftover wedding champagne with bon bons each night. Before you know it, six months has passed and it’s brought something new to your marriage: 15 extra pounds on each of you. 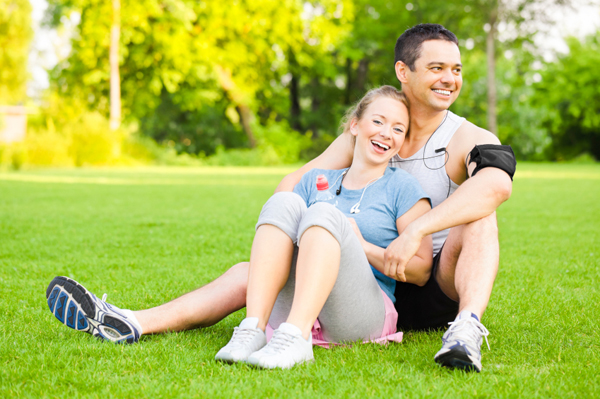 Unlike weight gain spurred by traumatic events or sadness, the newlywed 15 is gained, pretty much, out of comfort and happiness. Plus, it sneaks up on you and goes unnoticed until your jeans no longer fit and your family starts inquiring about your due date.

So how common is newlywed weight gain? A study in the journal Obesity found that married couples were three times more likely to be classified as obese than singles were. In addition, younger newlyweds may be more susceptible to weight gain than those who marry older. Findings from the Obesity Society showed that women younger than 28 who were recently married gained 24 pounds in five years while their husbands gained close to 30 pounds. Compared to the averages of 15 pounds for women and 20 pounds for older newlyweds, that’s a pretty big difference. Whether you’ve gained it already or are worried you might, follow these three simple tips that will not only fight weight gain, but help you build a stronger marriage as well.

Couple who plays together, loses together

The normal adage is also true — those who play together often stay together — but those who play together also have a higher chance of losing weight together. Starting a weight loss or exercise plan together will not only keep you accountable, it’ll help motivate and inspire you. If you’re new to working out in general, join a gym and ask for personal training sessions for couples. If the gym isn’t your thing, try hiking, biking outside or just take up weeknight strolls around your neighborhood. If you’re both on the competitive side, set up an exercise goal and prize — for example, whoever completes a certain task the fastest (running a mile, hiking a certain incline) gets a night out on the town, a new game or new pair of earrings. This will not only motivate you both to push yourselves, you’ll get to reward yourselves with activities or gifts you love.

The quickest and easiest way to put on weight is to eat out regularly (not to mention it’s expensive). Many restaurants, especially nicer ones, load their food with butter, cream and sauces, and the serving sizes are often gigantic. Save your pennies, lose weight and have fun together by preparing healthy meals at home instead of going out. If you are both new to cooking, start out small and easy. Prepare a healthy stir-fry with frozen vegetables and lean chicken breasts, and assign each other to a task — for instance, you can prepare the vegetables while he grills the meat. Cooking together will save you time and give you both a feeling of accomplishment. For variety and to broaden your cooking expertise, cook a new meal every week using ingredients completely new to you, like exotic vegetables, new cuts of meat, or new spices and herbs. Plus, by saving your dinners out for special occasions, you’ll have more money to spend on trips, upgrades to your house or apartment, or gifts!

When you’re just married, you don’t need to be told to have sex, if you know what I mean. Every chance you get, you’re under the sheets. However, as time passes, life picks back up and schedules get hectic; sex every night turns into every weekend, which eventually fades to once or twice a month. If you can’t remember the last time you had sex, it’s time to hit the sheets and burn some calories! You can burn as many as 145 calories just by having sex for 30 minutes! In addition, you can also burn calories during foreplay, too. A massage burns 80-plus calories per hour, kissing burns up to 70 calories per 30 minutes, oral sex burns up to 100 calories per half-hour and making out can burn almost 250 calories per half-hour! Not only will you burn some serious calories, you’ll reconnect with one another. For added calorie burn and to add some spice, do some role-playing or do it somewhere other than your bed (like on the couch or in the kitchen!)

Playing, cooking and having sex — who knew fighting weight gain could be so fun?