No guy is perfect — and we’re thankful for that, because we like quirk! But sometimes a man’s less-than-pleasant traits can mean the difference between hanging onto him and cutting him loose. 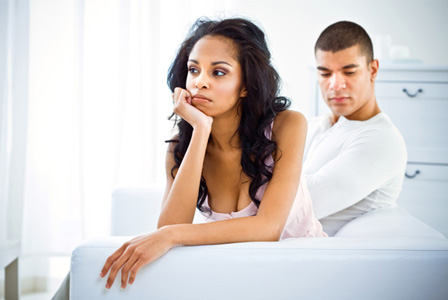 So in the spirit of March Madness bracket fever, we’d like to present the SheKnows Relationship Dealbreaker Sweet 16 list — grab a pen, furrow your brow and make the call: Which big relationship sin is the most heinous? You don’t have to tell us whether you’re speaking from personal experience — but you’re welcome to in the comments section!

He lives with his parents (and isn’t budging)

There’s absolutely nothing wrong with saving a little cash post-college by living with Mom and Dad before you venture out on your own. But if you get the sense that he’s in no big rush to leave since he’s got his mama to cook for him, clean for him and cater to his every whim, that’s a big ol’ relationship red flag. (Visualize Will Ferrell in Wedding Crashers — that’s just not pretty.) Snag yourself a piece of that homemade chocolate cake — but you might want to take it to go.

He has
questionable hygiene

We all get a little sweaty and nervous when we’re around someone we like, but if you suspect he has a bigger problem than occasional deodorant failure, it can be a major turnoff and a relationship deal breaker. If anything, think of all the time you’ll spend doling out Listerine strips and coaching him on how often to shower.

He doesn’t have a job

Good gigs can be scarce in this economy, but if you catch him napping or playing video games more often than you see him furiously sending out résumés or making ends meet at a part-time gig before he lands one in his field, it could be a sign of a less-than-stellar work ethic. And don’t slackers hang out on that grassy knoll over there?

When all of his texts, emails, Facebook messages and @-reply tweets are from women — specifically good-looking women — he might be offering all of these beauties more than his friendship. Plus, he tends to make female restaurant servers, shopgirls and even your cleaning lady giggle and blush. Think about it: Is a lifetime of jealousy and suspicion worth being with this guy?

Books? He doesn’t really have any. Unless you count a computer programming manual and a subscription to Maxim. You’ve often found yourself making a literary reference and slowly realizing he Just. Doesn’t. Get it. And perhaps he never will.

The day after a dinner date with him, you’ve settled onto your couch to watch a House Hunters marathon, and he calls to see if you want to meet up for lunch. It’s nice, sure, but you need some “me time” too. If he can’t go a day without seeing you or talking to you at length, this might be a relationship red flag that you might have a Needy Ned on your hands. Single gals, that special time with The Atlantic and freshly painted Essie polish is priceless. Don’t sell yourself out.

It’s his way or the highway

Maybe he’s older or maybe he’s just set in his ways, but you sense that he’s not open to compromise, whether it’s on where you both might live someday or where he wants to eat dinner tonight. And if he constantly insists that you stay over at his place rather than switching off occasionally, it’s a sure sign of a control freak. Life is not meant to be lived from an overnight bag.

Owing money can come in different packages: College loans are one thing, but $100,000 worth of credit card debt he incurred buying flatscreens and swanky vacays is another. You’re getting the sense that he might not understand the value of a dollar — and the thought of combining your finances with his someday doesn’t sit quite right with you. Especially if you’re a saver by nature. Think: WWSOD? (What would Suze Orman do?)

Up next: More Relationship dealbreakers >>