Cooking competitions are fun to watch — Top Chef especially. Now in its ninth season, it’s a captivating adventure in food – talented chefs, high-level cooking, gorgeous food and kitchen drama make for a fun, fast-paced watch whether you know your way around a stove or not. 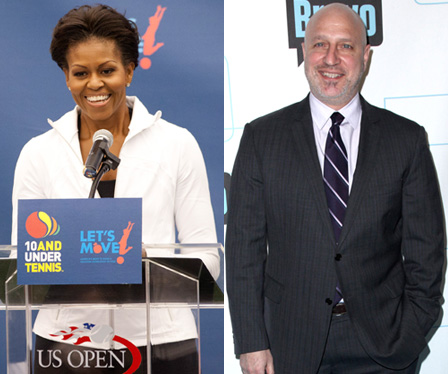 Now the popular show is doing something to give back and slicing, dicing and sautéing for a good cause. Top Chef head judge Tom Colicchio, along with several former contestants, want to help students across the country eat healthier.

Familiar faces Richard Blais (Top Chef All-Stars winner), Fabio Viviani (fan favorite, seasons five and eight), Jenn Carroll (seasons six and eight), Spike Mendelsohn (seasons four and eight) and season nine chefs Grayson Schmitz and Ed Lee will compete to help promote healthy food choices for students. These chefs from Bravo’s Emmy- and James Beard award-winning series will join First Lady Michelle Obama Feb. 10 in Dallas, Texas, on one of her national tour stops celebrating the second anniversary of her initiative Let’s Move!. “Unless we make sure all kids in the U.S. have access to plenty of healthy, whole foods, we will be diminishing their ability to learn, cutting off their potential to become healthy, productive adults, and paying the health care and social costs for generations to come,” Top Chef head judge Tom Colicchio said in a statement about the importance of helping students eat a healthy diet.

It makes sense the people who spend so much time in the kitchen want to help ensure that people eat better. Chefs have played an important role in the Let’s Move! Initiative in the past, teaming up to work with school chefs across the country on healthy school meals and to teach kids about the importance of a nutritious diet. The Top Chef superstars will compete in a healthy cooking competition with students from a Dallas elementary school, a gold school in the HealthierUS School Challenge program. The Dallas Independent School District is a leader in making healthy changes for its students – it has the most gold schools of any district in the country.

The Let’s Move! initiative started on Feb. 9, 2010, and has resulted in significant progress toward solving the problem of childhood obesity. Working together with Let’s Move!,  numerous groups have provided children with healthier food and greater opportunities for physical activity in schools and communities, helped provide families the information they need to make healthier choices, supported a healthy start in early childhood and have worked to ensure more people have access to healthy, affordable food. “We have the land and the technology to produce enough healthy food for every kid in America to eat a nutritious diet, and the knowledge and resources to educate children and families everywhere about the importance of eating right and exercise. The health and future security of our nation is directly linked to the health and well-being of our kids,” said Colicchio.

Bravo’s Top Chef offers a fascinating window into the competitive, pressure-filled environment of world-class cooking and the restaurant business at the highest level. The series features aspiring chefs who compete for their shot at culinary stardom and the chance to earn the title of Top Chef. Season nine of the series, Top Chef: Texas airs on Wednesdays on Bravo at 10 p.m. ET/PT.