In honor of Feb. 14, we thought it might be interesting to take a look at some of the things you shouldn’t do on the most romantic day of the year. Take a look and then let us know if we missed anything! 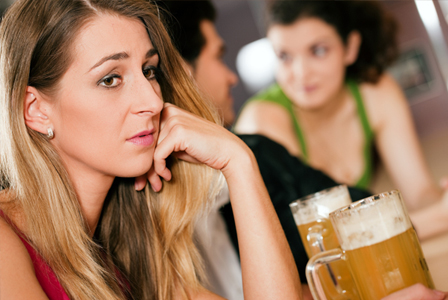 Be a third wheel

Your BFF might just be trying to be nice by inviting you out with her and her guy, but you’re better off sticking with friends who aren’t attached when it comes to Valentine’s Day plans. We’re not saying you wouldn’t have fun, but being a third wheel can get boring, so let the happy couple have their day (you can hang out with them any time) and make other plans for the night.

Break up with someone

You may have been waiting a while to do the deed, but hold off one more day so he isn’t stuck getting dumped on Valentine’s Day. Pretend you’re sick so you don’t have to go out and pretend to be all romantic when you’re really planning to break up with him. Whatever you do, don’t make things even harder for him by telling him it’s over on a day that’s supposed to be about love.

As tempting as it may be to give your ex a call when you’re feeling lonely on Valentine’s Day, we strongly advise against it. Even if he is still single, getting in touch, on the 14th of all days, will just give him the upper hand and make you look desperate – not what you should be going for with your ex. Rather than give in to temptation, call up some friends and go dancing, see a movie or go out for dinner as a group. Being solo on Valentine’s Day isn’t so bad when you’re having fun, surrounded by friends.

Go on a blind date

While you might have a fantastic night, we think there’s a good chance a blind date on Valentine’s Day could be a little awkward. No matter where you go, you’re going to be surrounded by happy couples gazing into each other’s eyes, which could be a lot of pressure for two people who have never met but who are supposed to be a good match (according to whoever set you up). Plus, if it goes badly, the last thing you need is to suffer through a never-ending awful date on the most loved-up day of the year.

18 hrs ago
by Shannon Brugh