Ever feel like your date just turned into some weirdo from a horror movie? Maybe you found out he’s two-faced like Jekyll and Hyde or just an old fashioned creep. Allow me to present you with a quick roundup of true dating horror stories. It’s enough for you to say, “I’ll beeeeee riiiiiggghhhht baaaaacckkk!!!”

Related story How to Introduce Your New Partner to Your Kids 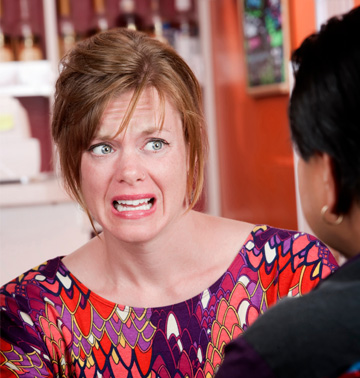 Sure, we want to date a guy who is interested in our day to day life. It’s nice when he’s curious to know what we like to do with our free time. However, it sounds like this gal found herself under surveillance!

“When I first moved to NYC, I dated a guy whose apartment overlooked Broadway Dance Center and he’d say these things about how he’d watch me take dance class from his bedroom window. He thought he was being all sexy and smooth, but it made me CRINGE!” – Marissa Z.

The element of surprise

Think: The Shining. Jack seems to have it all together at first: a provider, a likeable, responsible guy. Next thing you know, he’s bonkers to say the least. Some things just aren’t what they seem.

“I hooked up with a guy at a bar one night and thought it was going to be just that — a make out session with a hot dude. As it turns out, he asked me out on a date and I was psyched to learn more about him after all! So, we’re at a lovely French restaurant and he spends two hours telling me all about his favorite pastime: jousting. He can’t stop talking about his medieval costumes and competitions and I’m bored out of my mind! I try to change topics but I can’t even get a word in. After all that, he then proceeds to tell me that he’s baked a pie for dessert and it’s back at his place. I tell him I’m allergic to gluten and he says he also made pudding. PUDDING! Then, I told him that pudding wasn’t happening and I got out of there.” – Claire D.

Movies teach us: Beware of a man who slowly pets his hairless cat. He could be plotting unscrupulous world domination or maybe he’s just plain skeevy.

“I was dating a guy for a few weeks and it was at that turning point where things were getting hot and heavy. We’re in bed and about to get down to it; then it got weird when he started talking. Moans and groans can be hot, don’t get me wrong, but this dude started quietly whispering, ‘You’re a nice girl’ and petting me like his rabbit! It was so gross, I had to stop him right there. I asked him to leave and I never returned his calls.” – Maria E.

Like the song says, the freaks come out at night. And, this freak also had a terribly upsetting sense of humor.

“I went out with a DJ who had a crazy schedule. He was practically nocturnal and had to start work late at night whenever his set at a club started, so he always had to rush off after we hung out. One night, we fooled around and had oral sex. Afterwards, he rushed to get ready for his shift and started putting his clothes back on. Then, he looked at me with a smirk and said, ‘Look, I really hate to eat and run, but I gotta get to a gig.’ I was speechless! Was I supposed to think that was funny? I just stared blankly at him and never talked to him again.” – Candice M.

Compatibility and shared interests are one thing, but if a guy tells you that he’s into everything you’re into, you might want to fact check his backstory.

“I went on my very first online date and knew to expect the worst. First of all, he looked about 10 years older than his picture and he showed up looking pretty shabby for a first date. He obviously hadn’t showered that day and absolutely reeked of cigarette smoke! We met at the coffee shop where he worked and lied about it (I wondered why everything was free!). But, that wasn’t even the worst part. Throughout our 30 minute coffee talk, he just said that he liked everything I liked. I’d say I was into yoga, and he’d say ‘Me too!’ I would tell him about singing in a band, and he’d day, ‘Me too!’ For fun, I threw one in there to see what he’d say, so I told him I wrote poetry in my journal every day. And, of course, he said, ‘Me, too!’ He even claimed to know people I knew, which was impossible. What a liar.” –  Kylie M.

Freakishly weird dates aside, if something feels truly off or dangerous about your date, I recommend going with your gut and making your escape!