You know whole grains are good for you. Whole wheat bread and oatmeal are no-brainers. But did you know there’s a protein-rich grain that pops up like micro-popcorn? Or that buckwheat pancakes are a delicious way to get your Omega 3? Boost your grain IQ and your health by adding some of these whole grains to your diet. 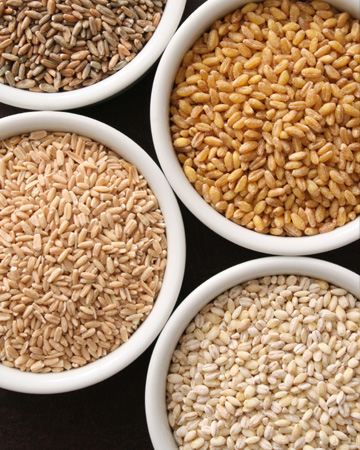 According to the Whole Grains council, amaranth’s popularity is on the rise. This can be attributed to the fact that it has more protein than any other gluten-free grain. In South America, you’ll find amaranth popped like tiny popcorn and sold by street vendors. Here in the U.S., you’re more likely to see amaranth in products including crackers, pancakes, cereals, breads and muffins.

If it’s fiber you seek, grab some whole grain barley and try it in soup or on its own as a side dish. Just make sure you’re not in a rush to cook this tough-hulled grain. The fiber in barley is known for its cholesterol-lowering properties, and in 2006 the FDA ruled that foods containing barley could promote their ability to reduce the risk of coronary disease.

Did you know that buckwheat is technically not a grain, but the seed of a fruit? So why is it included in a grain guide? According to the Whole Grains Council, buckwheat has been “adopted” into the grain family because of its nutrients, nutty flavor and appearance. This grain imposter is rich in Omega 3, magnesium, and dietary fiber. Try buckwheat in pancakes, Japanese soba noodles or cooked up like porridge.

Pop quiz! Is corn a vegetable or a grain? Actually, the answer is both. Fresh corn is a vegetable, while dried corn (popped or un-popped) is a grain. The whole grain corn packs as much as 10 times the amount of Vitamin A than other grains. This gluten-free grain is also high in antioxidants and in lutein, which promotes good eye health.

Oats are a popular whole grain due to their naturally sweet flavor, as well as the cholesterol-lowering fiber they contain. According to the American Heart Association, soluble fibers modestly reduce LDL (“bad”) cholesterol, and oats have the highest proportion of soluble fiber of any grain. Oats retain their bran and germ during processing, so if you’re enjoying oats, you can be assured you’re treating your body to the whole grain.

Rye contains a type of fiber that fills you up quickly, making it a grain well suited for people looking to whittle their waistline. It’s also a great whole grain for diabetics, because of its relatively low glycemic index and its ability to help stabilize blood sugars.

Wheat is the most commonly used grain in breads, because it contains the stretchy protein gluten, which lets bakers make breads that rise. Whole wheat provides fiber, B vitamins, vitamin E, iron, magnesium, phosphorous and potassium. To get the full benefits of this grain, be sure to look for the term “whole wheat” when shopping the bread aisle.

Watch: Get the kids in on the whole grain action

Catherine McCord from Weelicious.com shows us how to roll up some granola balls for the whole family.

5 Healthy ways to add whole grains to your day
Women’s health: 5 Best foods to fight disease
Fill up on these fiber-rich foods and eat less

21 hrs ago
by Chimére L. Smith