A white dress with something borrowed and something blue? Unless you’re Kim Kardashian — and are doing it for show — a traditional wedding might not be your destiny. But something better than a hubby/two kids/tract house life might await you because today, you’re in charge of your relationship. 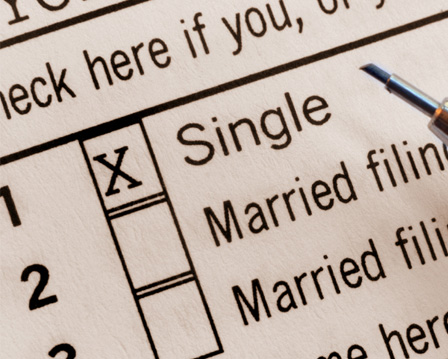 Over the last 30 years, the American relationship landscape has changed dramatically. Traditional marriage is on the decline. Living together, gay/bi and “stay-over” relationships are increasing, and for more than a decade, 40 percent (almost half!) of American babies have been born out of wedlock.

“Why?” you ask. This no-rules relationship revolution has been fueled by one huge social factor: women’s power. During the last half of this century, the world saw an unprecedented rise of women in America. Due to recession era lay-offs of expensive male employees, women now make up 55 percent of the workforce. More women hold bachelor’s degrees than men, and in a few cities, women aged 25-30 make more money than their male peers. We still need to put more skirts and stilettos in boardrooms, but overall, women have become more independent than ever.

How does our income affect our marriage rates? When women gain economic power, sexual freedom blooms. A good paycheck means that women need not withhold sex until a man signs up for a trip to the altar. It is the rise of women that has created a No-Rules Relationship Revolution. Traditional marriage is declining. Hook ups are mainstream. Women own their own orgasm and call the shots sexually. Yippee! Right?

But there’s a hangover to this party. It’s the side effect of the economy of sex. When women rise in power, sex rises in supply in a culture. When sex is in high supply, two things happen to men: A) They are less likely to commit to one woman. Traditional marriage declines and B) Men get lazy. Yep, easy sex means men tend to lose ambition and make less money. Apparently one of the reasons men strive for financial security is to secure a good woman, but when she comes for free, that urge declines.

And that leads to the other part — babies. I mean, if the purpose of mating had nothing to do with reproduction and the only thing you were interested in reproducing was your last earth-shattering orgasm, then there would be no problem. But babies are the little miracle problems that wiggle out of hook-ups, girlfriends, co-habiting unions, college sweethearts, and yes, marriages. And then there’s this eighteen year period of unpaid labor called parenthood.

The other social trend is the rise of single mothers. Fourteen million single mothers are raising one in four American kids. But most single mothers don’t live like a celeb single mom with a flock of nannies. Single mothers suffer poor mental and physical health and with the burden of being a provider and homemaker, their kids risk poverty and inadequate health care.

So what’s the answer? As thinking women, we need to find a way to make smart choices in our relationships. We can embrace the freedom that we have worked so hard for, but we shouldn’t discount the value of healthy, emotionally bonded romantic relationships. These are supportive nests for our children.