Celebrity dance fitness instructor Ilyse Baker teaches us five moves to slim down like the cast of Dancing with the Stars. 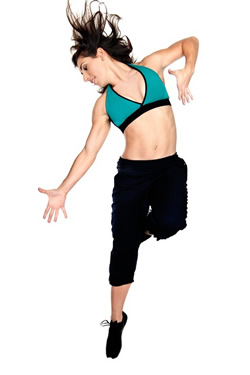 Coach to the celebs Ilyse Baker shows SheKnows how to burn calories the hip way.

Watching the cast slim down each season is almost as fun as speculating on who’s going to win, but what women at home want to know most is, “How can I get those results?”

Since we can’t all have Cheryl Burke and Derek Hough at our disposal for daily dance routines, we turned to celebrity dance fitness instructor Ilyse Baker for her advice on how to shimmy your way to a better bod.

Ilyse has worked with lots of big names in the business, including LeAnn Rimes and Rihanna.

“LeAnn Rimes takes my class every week,” says Ilyse. “She’s a rock star. She has so much passion and she looks great.”

Baker says the reason dancing is a great workout is because it doesn’t feel like a workout.

Baker says you can burn 400 to 600 calories per hour in an average jazz class, and by hitting the studio four to six times a week, you, too, can achieve a celebrity physique. “Dance is fun,” she tells us. “[Your] mind is working in a whole different direction than running on the treadmill. It’s not boring.”

For a taste of what to expect, try our five Dancing with the Stars- inspired moves with dance expert Ilyse Baker.

How much weight you lose will depend on how much you put into it, Baker tells SheKnows. But, she assures us, “Once you get into a dance class, you’re not going to want to stop dancing!”

Swing your hips to the video tutorial above or try one of Baker’s classes in person. >>

More fitness with the stars

12 hrs ago
by Dr. Lexx Brown-James