If your relationship needs a jump-start to get the sparks flying again, why not try some friendly competition? While it may sound unromantic, playing a game or sport against your guy could spice things up and have a positive effect on your relationship. 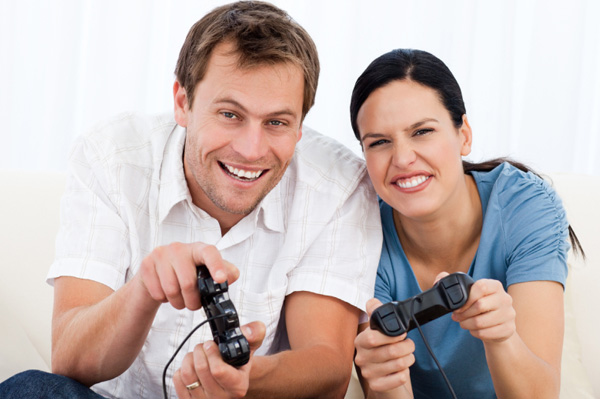 Do couples who play together stay together? According to a 2009 study conducted by Kelton Research, they at least want to give that theory a try. Eighty percent of respondents said they would enjoy playing video games with their significant other, with the biggest allure for 61 percent being the fact that video gaming is something a couple can do together.

A survey conducted by MSNBC found that 55 percent of respondents already do play video games with their partner, while almost 30 percent wish they did. But don’t even think about letting your partner win. Nearly 70 percent of the Kelton Research survey’s respondents admitted that they’d rather win than let their date take top prize, but it’s the ladies who are fiercer competitors. More than 80 percent of women said they compete to beat their date, compared to 56 percent of men. Game on!

When it comes to competing, we all know some couples who say they never fight. Ever. We also know couples who are so competitive that every argument with their spouse or partner, no matter how trivial, turns into an epic battle complete with yelling, screaming and doors that end up off their hinges from being slammed so much.

Neither of these scenarios is ultimately ideal, but it is healthy to strike the right balance where competition is concerned. Never fighting can mean there is a lack of passion. Too much obsessing over who gets the last word can get old fast (and ruin any hope of long-term happiness), but get the level just right and you have a recipe for relationship success.

Get your game on

This is where games come in. Games by their nature involve pitting yourself against an opponent, and playing to win. Whether you opt for a game of one-on-one at the basketball court, immerse yourself in Mario Kart or dust off the Scrabble board, there are countless ways to inject some competitive spirit into your love life.

Ample research also suggests that couples who work out together have better sex, and like working out, competing with someone raises your heart rate and sends adrenaline coursing through your veins. It’s not hard to see how both activities – working out and playing games together – could improve life in the bedroom and beyond.

Whatever your gaming pleasure, playing to win against your significant other should help fuel your competitive fire – and ideally heat up your relationship.