Staying married is no easy feat. Showing off the rock and saying “I do” are the easy parts — it’s the “till death do us part” thing that takes work. To help you avoid a case of marriage meltdown, we’re here to make sure you’re on the right track and not doing anything to jeopardize your union. Take a look at our list of four issues that could be hurting your marriage. 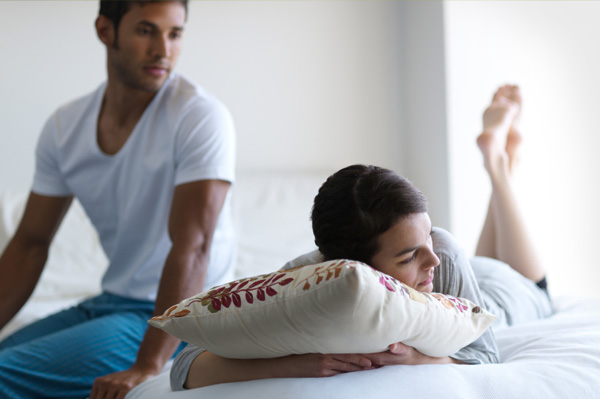 Keeping feelings to yourself

Holding back what you’re feeling is never a good idea in a marriage (or any relationship for that matter). What you don’t say could test your twosome even more than what you do, so make sure you’re not letting things slide because you’d rather not discuss them. For example, if your husband has a bad habit of cutting you off every time you try to tell a story (and you hate when he does that), don’t just sit there fuming — let him know. He may not even realize he’s doing it!

We know that real life gets in the way of having fun. Trust us, we’d much rather be having drinks with friends than doing our third load of laundry too, but that doesn’t mean you and your partner can’t build in time amongst your never-ending to-do list to have fun together. If it’s been months since you laughed together or did anything that didn’t involve mundane household chores, it’s time to let loose. Go see a movie, get together with friends you haven’t seen in a while, enjoy some live music or go to a new bar or restaurant you’ve been meaning to check out — anything to get you out of your usual evening or weekend routine.

Fights happen. Men do stupid things (like forgetting birthdays and anniversaries), but holding on to your anger is a surefire way to ruin your marriage. If he’s done something that made you crazy and you’re still thinking about it two weeks later, you’re going to have to find a way to deal with it. Talk about the issue with your husband, explaining gently that you’re still not over whatever he did. Ask him for a more clear explanation of why he did whatever has you upset or a more sincere apology. If he has apologized (several times), think about venting your residual anger to a friend to get your feelings out in the open. Eventually you’re going to have to move on — for your sake and the sake of your marriage.

Not listening to each other

Have you ever felt like your husband is merely watching your mouth move rather than actually listening to you? Do you ever nod and smile while your spouse is speaking only to realize five minutes later that you have no idea what he just said? Welcome to married life at the end of a long day when you’d rather zone out in front of the TV than talk. While this is perfectly acceptable some of the time, you do need to make an effort to really listen to what your partner is telling you. It’s the only way to stay connected and understand what’s going on in each other’s lives. The more you tune him out, the less involved in his life you’ll be — and vice versa.

18 hrs ago
by Theresa Prenger