Ever wonder what he really finds sexy? Get this: It’s not just wispy Victoria’s Secret underthings (though he probably wouldn’t argue with those either). We interviewed real guys to find out what they love to see a woman in. What they said might surprise you… 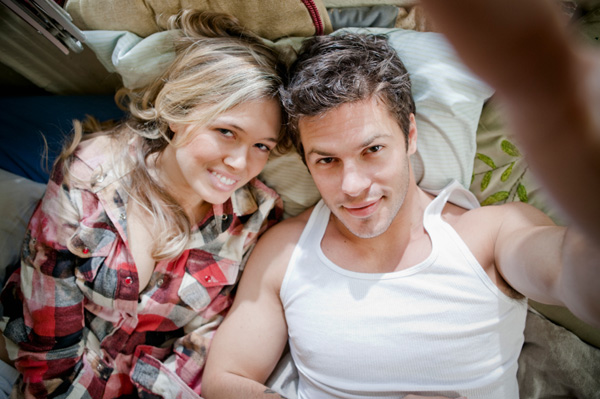 Put the concealer down!

“I love it when a woman wears… boys’/baggy clothes and no makeup. Because beautiful women shouldn’t have to be dolled up to go out, get down and turn heads.”

Show off your sense of humor

“I love it when a woman… lets her geek (or punk) flag fly. A little personality or humor on a cute T-shirt really helps break the ice when you’re at a concert, outdoor movie, ball game or beer garden. One of the first times we hung out, my girlfriend wore an amusing shirt from Threadless that depicted the real reason we don’t see unicorns nowadays. I still love that shirt.”

Work it in your work clothes

“I love it when a woman wears… the classic professional look: crisp white or a boldly colored blouse and a pencil skirt or slacks. Heels are a definite plus. Ponytail: your call.”

“I love it when a woman wears… an old shirt of mine on a day spent being lazy around the house.”

“I love it when a woman wears… skinny jeans or leggings and flats. It’s like the new mini-skirt. In college I used to look forward to the ‘skin show’ of summer, but I almost prefer seeing parades of Audrey Hepburn once the leaves change. It’s chic and covered up — yet sexy as hell.”

“I love it when a woman wears … a cool T-shirt, because it gives me something to ask her about, and if it’s for a good band, I know she has cool taste.”

“I love it when a woman wears… vintage lingerie. I’ve just never been a Victoria’s Secret kind of guy, but there’s something about old-timey pin-ups and that red herring dragging on a cigarette you’ll find on the cover of a 1940s hard-boiled pulp novel — the exposed garter belts, stockings and curves — so much sexier than a runway waif in a bra and panties.”

More on what men want

8 hrs ago
by Iris Goldsztajn