When you hear about women being abused by their boyfriends or husbands, how often do you ask “Why in the world do these women stay with these guys?” It’s logical for a woman to leave an abusive relationship, but abuse isn’t logical. We talked with abuse survivor Tami Keele, author of GET OUT! Save Your Life, to shed light on the reasons women don’t leave their abusers and how, despite the physical and emotional damage that results from abuse, women can heal from the scars and even come out victorious once they break free. 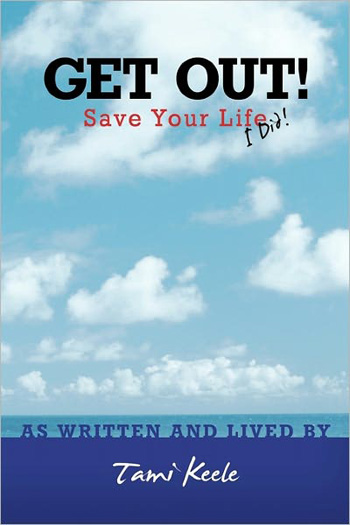 Why do women stay in abusive relationships?

SheKnows: Many people who have not experienced abuse do not understand why a woman would stay in an abusive relationship. Can you explain why you didn’t leave when the abuse began?

Tami Keele: Early in my relationship with my ex-husband, I allowed him to take control of everything in my life. It started with simple things like the bills. Before long he was telling me what clothes I could wear and who my friends could be. I was in love with him, so I allowed this to take place. Once he started to get control there was no stopping it. Within a short time he had me believing this was normal. When the physical abuse started, I was in love and fear of him. He would get me to feel sorry for him after he abused me; it is a form of Stockholm Syndrome. Getting out was hard because he had control of all of our finances, I had no money and no credit cards and nowhere to go.

It’s hard, but get out before it’s too late

SheKnows: What was the catalyst for you to leave your 18-year-long abusive marriage?

Tami Keele: After being held captive in a dungeon for two years, my health was fading and my memory was fading. Steven broke into another rage and began tearing up the house, then he began to beat me. He broke my nose, I fell to the floor and he knocked the TV and stand on top of me. As I was lying there on the ground a female voice whispered into my left ear, “Get Out! Save your life!” I believe it was an angel because I was alone in my room. After hearing that, I knew that if I didn’t run this time I would die. This is when I told myself that I was worthy of love. I gave myself the love that I had been longing for. I believe that loving yourself is the first step to a happy life.

SheKnows: What did you think and feel after you broke free from your abuser?

Tami Keele: After he was removed from my life, I was on what felt like an emotional high. I was so proud of myself for finally telling someone the truth about my abuse. I wasn’t concerned about the future, just glad to be alive. I also went to therapy for a year as a constant. In therapy I learned that I also suffer from post-traumatic stress syndrome. I took the techniques and strategies from therapy and applied them to my life and began the healing process from extreme trauma and abuse from an abuser.

Rely on your faith

SheKnows: How did your life change spiritually?

Tami Keele: I began to go to church on a regular basis and joined a Bible study. I believe God and Jesus had a better plan for me than to be abused. I also began to nurture the little girl inside and I rebirthed myself into a new positive way of thinking.

SheKnows: To whom and to what did you turn in order to recover, heal, and regain yourself?

Tami Keele: I knew God and Jesus were there with me. I put my life in God’s hands and went forward. Church was a big help to me spiritually. I put total belief into my faith. I was walking by faith even when I could not see what was in front of me. I also went to therapy, which helped guide me toward a positive way of life. Therapy gave me a blueprint of understanding how to deal with extreme abuse.

Break the cycle of abuse for your children’s sake

SheKnows: What message do you want to give to women in abusive relationships?

Tami Keele: Women, it is only going to get worse. The abuse will take your self-confidence and make you feel dependent on your abuser. A grip on the arms will turn into a slap or punch and on to a beating. When you tell someone you are being abused, it will lead to freedom and you getting your self-confidence back. You must break the cycle because domestic violence is a learned behavior. Your children will grow up thinking abuse is normal and become an abuser or allow themselves to be abused. Become a survivor, not a statistic. I did, and so can you.

SheKnows: What message do you want to give to loved ones of those abused in terms of how to help?

Tami Keele: I believe family support is key for the abused. The person that is being abused has no self-confidence or strength. Without support, she will probably end up going back into the abusive relationship. Offering a place to stay is very important, and a couch could mean the difference between life and death. Please, don’t look away if your loved one needs help. She needs positive emotional support and love. Most of all she needs someone she can trust. Remember that she is a victim, and that being abused is not her fault!