Men are notorious for clamming up when it comes to talking about how they feel and what they’re thinking. It can be frustrating and at times, hard on your relationship when you’re dealing with a guy who refuses to open up, but there are a few ways to get around his penchant for staying tight-lipped. We’ve put together some simple relationship advice for getting your guy to open up. 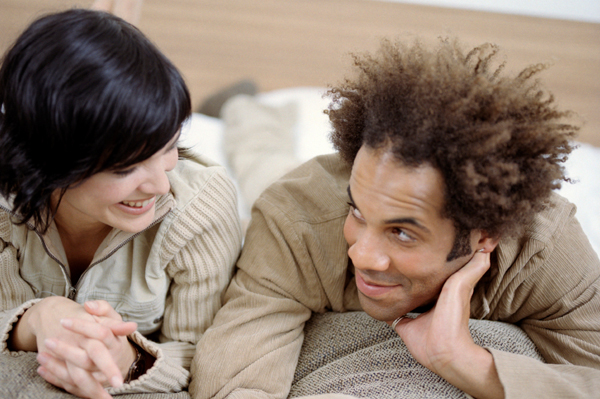 If you have something on your mind, it can be very tempting to burst into the room where your guy is working, sleeping or in the middle of a phone conversation, but you want to stop and think before you start peppering him with questions. Consider talking to him when he’s usually most relaxed. That’s the best time for you to approach in your attempt to get him to open up. Doing so when he’s stressed out, barely in the door from a hard day at work or otherwise preoccupied is never a good idea and will just put him on edge. Timing is everything when you want to have a serious discussion about how someone feels or what is going on in the relationship.

Like timing, location can also make a big difference when it comes to how much someone will be willing to open up. If you can, get out of the house and find somewhere that you both feel at ease and that is conducive to talking (e.g. not filled with loud music or too many people). Being outside of the usual distractions (iPhone, TV, magazines lying around) makes talking on a deeper level a lot easier and makes people (even those who keep fairly quiet about themselves) more likely to open up. Try a local coffee shop, nearby park or even a low-key pub that doesn’t get overcrowded.

Questions that can be answered with either “yes” or “no” are the worst kind to ask if you want to get someone talking. These types of dead-end questions don’t allow for any movement or flow in the conversation. Instead, ask open-ended questions that will force your partner to dig a little deeper with his responses. Ask him questions similar to the following examples, tailored to whatever it is you want to talk to him about:

If you want your guy to open up, we suggest you take the lead and do some sharing of your own to get him in the mood for a more intimate conversation. Fair is fair so show him that you’re willing to let him inside your head (and that it’s really not that scary to have an open, honest discussion). Once you’ve opened up to him – about what you’re most excited about, new goals you have, things that scare you – he will be much more likely to do the same, or at least less unwilling to chat than usual.

5 hrs ago
by Gina Escandon