Once again the end of the week has rolled around and your guy is glued to football. If you can’t take another minute of touchdowns and terrible towels, why not try to lure him away with some awesome halftime sex?

We teamed up with the girls of Whilethemenwatch.com to bring you these five tips that will make him so satisfied that he’ll totally forget about the second half of the game!

Put on the proper uniform

While we usually think jerseys are a no-no anywhere off the field, we can make an exception for the bedroom with cute NFL clothing for women. Victoria’s Secret PINK and Alyssa Milano’s Touch clothing lines allow you to feel confident so you’ll be able to hit a homerun, score a touchdown or whatever. 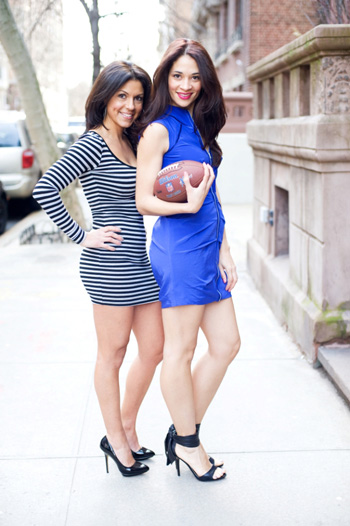 Let him know up front that there’s no time clock ticking on this love session. He’ll appreciate the effort you put into letting him know you’re ready to hit the sack! Football halftimes last for 20 minutes, so work together to try to make the passion last longer than that.

There’s more than one way to palm a football. Have your man show you his recommended techniques to grasp, hold and handle his equipment — then give him a play-by-play of your own.

Let’s face it, we still have no idea what a punt is. But, put sports vocabulary into sexual terms and you have our attention! Have your man teach you a new football word each week by explaining how it would work during sex. Hint:  Start with “first down.” See, isn’t this fun?

You’re never going to score if you keep reading from the same old playbook. Be adventurous and study up on some new football moves and positions that you’d like to try. Just be careful not to go too far out of bounds!

Lena Sutherland and Jules Mancuso are co-hosts of a live sports talk show for women at Whilethemenwatch.com. Bored by having to put up with their sports-addicted husbands, Sutherland and Mancuso say they comment on anything that regular announcers don’t. From talking about the umpire’s ensemble to cheering for their boyfriend of the game, it’s not sports bashing, but rather a fun, fresh take on watching sports that any woman can enjoy.

More on sports and relationships

How to use football to improve your dating life or relationship
Recruit your own fantasy football team
Football dictionary: Football terms for non-fans