If you live in the same town or city as your ex, you’re bound to run into him at some point. If the breakup was amicable, then you have nothing to worry about, but if your split caused a serious rift and the anger and frustration still haven’t completely dissipated, seeing your ex at a party, a bar or anywhere else you might have to actually interact can be a traumatizing thought. Before you vow to move across the country to avoid seeing him, we have some survival strategies, and breakup tips, that will help make any potential run-ins easier. 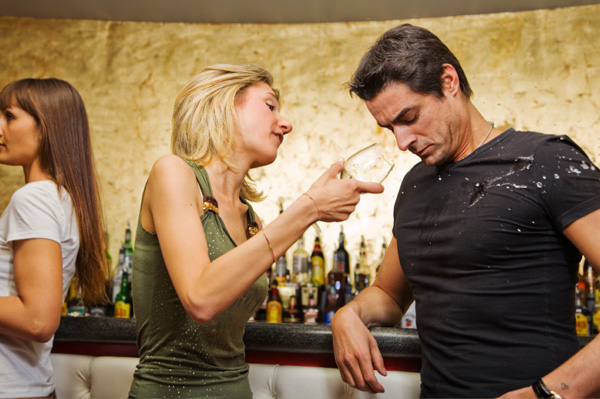 The first step is to stay calm. Maybe he broke your heart, maybe you can’t stand the sight of him or worse, you still have feelings for him. Regardless of what may be going on in your head (or your heart), resist the urge to panic at the thought of having to speak to him. Before you cross the room to go see him, or as he’s coming towards you, take a deep breath. Don’t think of this situation as a potential disaster — it’s merely a conversation with someone you haven’t seen for a while. The more you let anxiety get the better of you, the more awkward the encounter will be, but if you remain calm (or at least pretend you’re calm), things will go much smoother.

You may be tempted to act aloof and barely acknowledge your ex’s existence, but acting mean to him won’t make the situation any easier. Hostility, though tempting if the split was particularly rough, will just make it obvious that you’re still bitter about the breakup, and the last thing you want is for him to know that he still has the upper hand. No matter how much you want to snub him or give him a speech about what a jerk he was, save it. He doesn’t need to know you still think about him (even if they are only negative thoughts). Don’t give him the satisfaction of knowing he has that big of an effect on you. You don’t have to invite him to dinner, but do try to smile and be nice.

If he tries to stir the pot or says something that makes you want to slap him, do not take the bait. A spat in pubic will just open old wounds and make you feel awful. Let him say whatever he wants to say. If he’s still not over the breakup, that’s his problem — not yours. Allowing yourself to get caught up in past drama isn’t healthy and will just make you angrier. If he’s going to continue playing games even though you two are no longer together, simply walk away and refuse to engage.

The best thing you can do when you run into an ex is to project confidence and do your best to show him that you’re better off on your own. You don’t need to boast about new guys you’re dating or all the fun things you’re doing now that he’s out of your life, but do act like you have your life together. Smile, stand up straight, make eye contact and present your best self. Even if you don’t feel particularly confident, fake it so you appear as if seeing your ex doesn’t faze you in the slightest.